Home » We’re In A Two-Front War 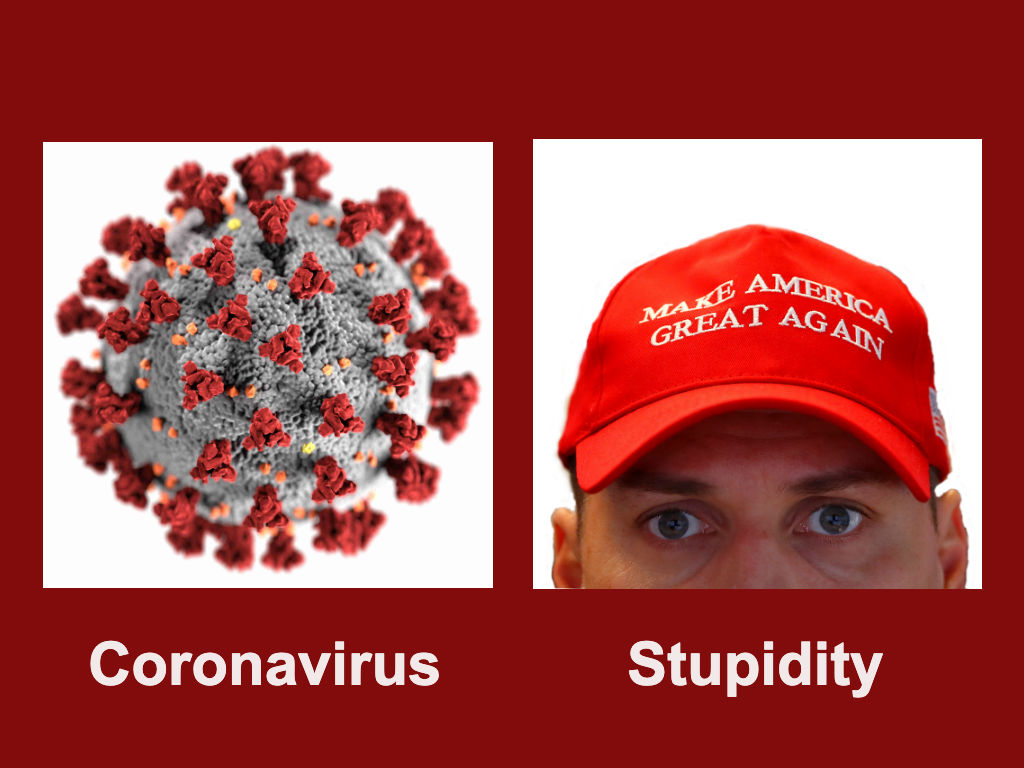 We’re In A Two-Front War

As cases of Coronavirus continue to grow in the US, along with panic about the economy, unemployment, rising crime and how long it will be before the social fabric rips apart completely, one needs to take a look outside our borders to see just how hopeless a predicament we are in.  Or not.

As much as Americans like to bathe in our own exceptionalism, we weren’t the only nation to be hit by this deadly pandemic. Every country was. Italy, for instance, was hit harder and faster than we were. Italy was in fact the canary-in-the-coal-mine for the western world.

On March 21, 2020 the media was horrified when Italy reported 6,554 new cases of Coronavirus in the past 24 hours. Adjusted for population density that would have been the equivalent of 54,000 new daily cases in the US. That was inconceivable for us. Naturally, almost every nation quarantined Italy. 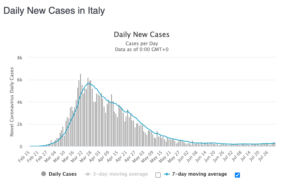 Italy’s federal government responded with draconian resolve: a nationwide lockdown, regional quarantines, a shutdown of all non-essential industry and retail, schools were closed indefinitely, a civilian travel ban was ordered between red zone communities and there was a three-month prison sentence for anyone violating the orders. Of course, social distancing and masks had already been mandated and Italians were mostly cooperative.

On May 16, 2020, after just 60 days, daily infections in Italy had fallen to 789. Prime Minister Giuseppe Conte announced plans for the reopening of the country. On May 18 most businesses could reopen and free movement was granted to all citizens within their respective regions. Movement across regions was still banned for non-essential reasons. That was strategic because any local outbreaks could be controlled with regional measures that didn’t affect other states.  By June 15, Italy was for all practical purposes reopen.

It was ninety days from the worst superspreader country in the world to back in business again. Was Coronavirus eliminated?  No, but it’s averaged under 300 new cases per day since June 1. Italy’s government has reacted effectively to flare ups with regional solutions.  Its new case rate is about the same as NYC now, which has one-eighth the population.

You’ll see this timeline repeated across Europe, Asia, Australia, New Zealand and even with our immediate neighbor to the north, Canada.

Then there’s the US… 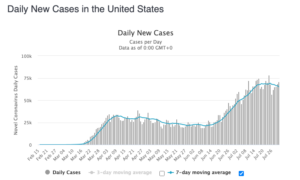 On July 31, the United States reported 71,000 new cases of Coronavirus. Not only are there no signs of the virus abating, the national numbers continue to climb every day. Why? The virus hasn’t mutated into something more deadly just for Americans. That leaves only one answer.  We — and by “we” I mean both the inept, disengaged Donald Trump and We The People — fucked up big time. We only have ourselves to blame. Other countries got a handle on this weeks and months ago.

There are two problems unique to the US.  The first is that there has never been a coherent national response to this national public safety threat, as was/is the case everywhere else on the planet. Trump couldn’t have been more disengaged from his responsibility to protect the American people, which is in stark contrast to his predecessor who kept two pandemics out of the US. While most Americans want to beat this virus and are willing to do whatever it takes to get back to normal life as quickly as possible we have a sociopathic president whose only priority is to win an election. He doesn’t want to burn political capital with decisive leadership during a health emergency which happened on his watch — a health emergency he wouldn’t even admit was a serious threat until body counts mounted into the thousands. He can’t risk alienating his faithful albeit shrinking base with restrictive and unpopular orders.

The second is that this loud but small minority of eye rollers, shoulder shruggers, narcissistic hedonists and self-proclaimed scientists are mostly Trump’s voters but also include people he hopes to sway in 2020: party-going Millennials and limousine liberals who want to get back to their still-closed clubs. They dismiss conventional Science in favor of conspiracy theories and witch doctors. If it requires any measure of self-sacrifice, they oppose common sense measures to bring the epidemic under control as a violation of their civil rights. They distrust government even as government completely sells them out to the disease.

Republicans have seen the dismal (for them) 2020 polling data so they’ve weaponized the public’s fear, frustrations and desire to get back to their beauty parlors and happy hours in hopes that it will pay off on Election Day.  Nothing demonstrates this politically cynical, self-destructive gambit more than Texas’ governor Greg Abbot reopening bars, malls and movie theaters back in May even as cases of Coronavirus in Texas sailed past 40,000 in his state. Today there are almost a half million active cases in Texas, overcrowded hospitals and 7,266 dead Texans to show for it. Despite Texas being in the Top Three most infected states in the country for weeks, it still finds itself in the bottom 20% for Coronavirus testing so we really don’t know how bad things are in that state.

This is something we don’t see in any other country: a suicide cult of amped-up, entitled, poorly-informed drones whose core source of data is the media propaganda arm of a political party. That and chain letter conspiracies distributed by Russian disinformation campaigns. To be fair, there have been organized protests against COVID-19 measures in other countries, notably in Germany. But the protests are relatively small and organized by fringe political opponents seeking office. And their governments aren’t encouraging them with “atta boys”.

These people are the Second Front in the war on Coronavirus and they’re fighting for the other side. They’ve become a bigger threat to public health and the future of the country than the virus itself. Their numbers may be relatively small but it doesn’t take many of them to create major Coronavirus breakouts which threaten everybody. That includes the rest of the world which is why Americans are non grata just about everywhere else on the planet now. We are currently more physically isolated from the world than were the citizens of the former Soviet Union. If you think that alone isn’t enough to blow a huge hole in our economy then you don’t know how economies work.

Foreign tourism alone pumped $1.1 trillion into the US economy in 2019. The US travel industry is 7.8 million jobs, 7% of all private-sector employment and accounts for 2.8% of our total GDP. That doesn’t even account for our tanking exports, which are at record lows in 2020 and which also reflects in our record drop in the national GDP. We won’t get any of this back until there’s a major reversal in Coronavirus numbers in the US. But the problem is that the current White House and many Republican governors seem to think that this will happen magically, that if we just conduct business as usual it will all go away by itself — something that makes absolutely no sense and also something that no other country has found. The “herd immunity” pretext upon which some of this has been falsely based has been debunked by Science. But they don’t listen to Science, just bible school dropouts on Fox News.

Can it get worse?  It absolutely can and will if schools reopen next month. It took just two days in enclosed cabins at the now-christened “Camp Covid” YMCA camp in Georgia for 40% of the kids — you know, Secretary DeVos’ supposed “blockers” — to be infected by COVID-19.  260 kids out of 600 in just two days. What’s the forecast for millions of school children returning to those same conditions for the next nine months? And their parents?  And their teachers? And as if we needed more good news, JAMA reports that kids carry up to 100 times the viral load in their noses and throats than do adults. They may be less likely to contract serious symptoms of the disease themselves but kids are natural super-spreaders.