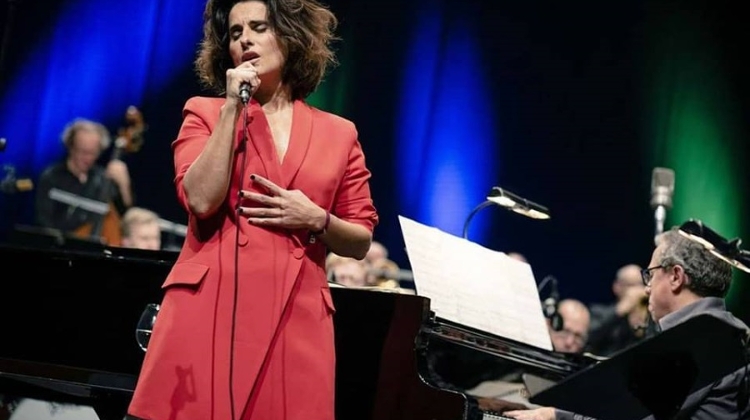 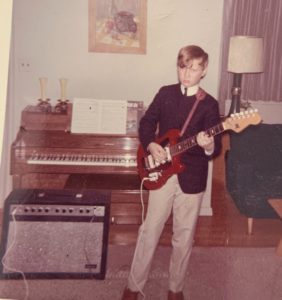 I remember the exact moment I got into music. My parents always had records playing on our Motorola cabinet hi-fi: Frank, Dean, Sammy, Broadway, Beethoven. I was tone-deaf to all of it. I used to screw around with my older brother’s gut string guitar and I guess I must have shown some musical aptitude because the folks made me start taking coronet lessons when I was 10. When I showed no interest in that they bought me a ukelele, which was a little more fun. Then piano lessons. Then choir.  That “exact moment” was when I was 14 and heard the Beatles’ “I Wanna Hold Your Hand”. I didn’t want a go-kart anymore. Or flying lessons. I wanted a cherry red Kent electric guitar and Silvertone amp. So I washed cars, cut lawns and delivered newspapers to buy them for myself. That scratched my itch. But I never felt completely connected to guitar. That happened when I first played a bass. It was something about the power of just one note, or something like that.

Rats. I got a little off-track with the set up here. I’ll try again. 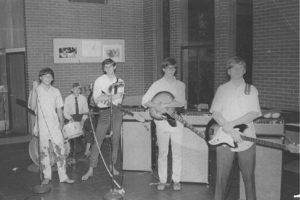 By the time I was 16 I had a band, Shapes of Things.  We played some Beatles, some R&B.  We actually did pretty well in the local DC music scene. We worked most weekends and I always had a little cash in my pocket. But I was getting pretty bored of the same music and, subconsciously, was waiting for the third “A ha!” musical moment. It came from an unusual event. My guitar player, singer and I had scored free tickets to a Jose Feliciano concert at the Carter-Barron Amphitheater in DC.  Truthfully, I couldn’t have been less interested in Jose Feliciano. It was just something to do.

Feliciano’s opening act was Sergio Mendes and Brasil ’66. From the moment they started playing I sat up straight. What was this music?!  It was powerful without being loud. It was rhythmic without even a guitar player. It made you move your body. It was different. The two hot female singers didn’t hurt either.  Afterward, Brian, Jeff and I held an emergency staff meeting in the parking lot. The Shapes were dead. Long live whatever samba band a group of 15-17 year olds could manage.

We worked hard, found the right players and did very well as a Brasil ’66 cover band. It was amazing how many embassies and Foggy Bottom cocktail parties wanted a teen-aged band that played music they related to and which also had two cute 16 year old girls in super-short miniskirts.

The point is, I have an affinity for world music. Fast forward to Lisbon, Portugal 2012. My lady friend was invited to one of her co-workers’ weddings in Lisbon. I went as the +1. I love travel. That was all the convincing I needed. We decided to make it a two-week vacation with visits to Sintra, Porto, Guimaraes and Braga. And — she said — we’re going to listen to fado. I remembered fado as a kind of depressing form of flamenco but I agreed.

One night we went to the late show at Clube de Fado in Alfama… sort of the BB King’s of fado. I was instantly attracted to it. It was simple and complex at the same time. There were some Spanish influences but also jazz, Moorish, a little blues, a little bluegrass, even some Broadway. It was like Portuguese cabaret.

There was a tall, stunning singer — I was told the correct title was fadista — Cuca Roseta.  She was mesmerizing.

When I got back to NYC I began researching fadistas with my typical obsession. For me, the music fit female voices better than males so I started listening to Amália Rodrigues, Dulce Pontes, Mariza, Ana Moura, Cristina Branco, and Gisela João. My favorite? Cristina Branco.

Cristina brings a bit more western/jazz style into her performances. She’s also got a very trained voice. And I like her song choices.

I played this song for a female friend who had never heard fado before. Her comment was “My God! It’s pure sex!” I wasn’t prepared for that response.

Not surprisingly, fado isn’t a huge musical phenomenon.  Even a lot of Portuguese don’t care for it because it reminds them of the pre-Carnation Revolution days. Naturally, women with pipes like theirs have little trouble crossing over.  Here’s one of my favorite Cristina torch ballads.

There are dozens of amazing fado singers. In general, I’ve always preferred female vocalists because their vocal range tends to sit above the rhythm section. Portugal today is as musically contemporary as the US so a lot of fado is legacy and its performers trend towards their 40s and 50s. Nevertheless there are some amazing young fado singers like this fadista, Gisela João.