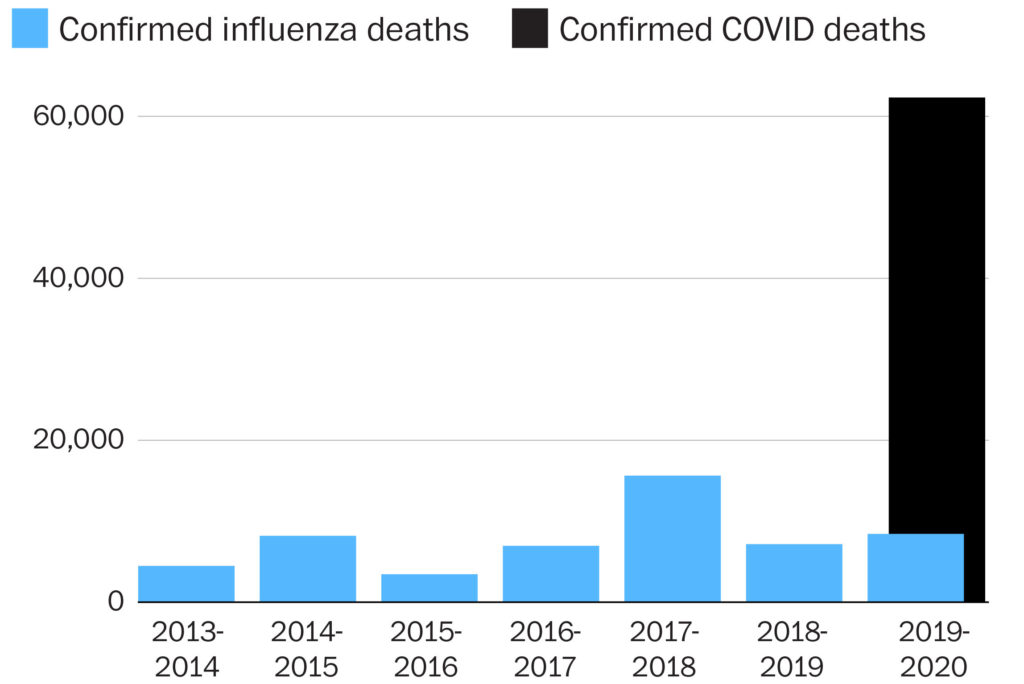 When it comes to naked politicization of things that have no political component, nobody does it better than the modern Republican party.  Global warming, school shootings, phony immigrant crime sprees, alternative energy, even non-incandescent light bulbs and fluoridated water — all are subject to becoming red herring pretexts to allow the GOP, which hasn’t had a fresh policy idea since the early 1980s, to insert itself into the public dialogue with a “hot” manufactured political issue. I wish the Democrats were better at this because so many in the American electorate have the depth of issue awareness of a bumper sticker. 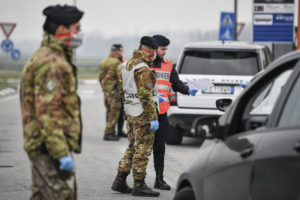 Way back in early March, when Covid-19 slammed into Italy, I was chatting with my friend Peter, an American ex-pat living in Pistoia, Italy just north of Florence. Peter told me about the steps he’d seen taken north of him. The Italian military was physically quarantining several Lombardy provinces with roadblocks and enforcing total civilian lockdown, including with arrests. Schools were closed, all public events were cancelled, all restaurants and bars in the country were closed indefinitely, his own Pistoia Blues Festival was postponed until next year.

The deprivations came fast and furious for Italians over a matter of less than two weeks as Italy’s federal government recognized the potential of this devastating disease. Peter said that people were scared but cooperating with its national strategy to defeat the virus and with each other. I remember saying, “Good luck seeing that in Idaho” and Peter, who’s from Virginia, said the same. “That’s going to be a very big problem when you get hit with what we’ve got!”  We were both prophetic and didn’t have to wait long to see how right we were.

That’s how Italy handled it. In fact, that’s how every other OECD country dealt with it too. But I knew that Republicans, and especially the Trump administration which had already demonstrated its callous ineptitude with its poor response to Hurricane Maria, would do things differently.  Whatever policy Big Science recommended to confront the pandemic, the anti-science factions of both the GOP and redneck country would oppose it, and with specious rationalizations. Again, I was right but never wished more to be wrong. Trump and the spin rooms at Fox News, RedState and Breitbart were ready to oppose anything the experts recommended. And that’s what they did.

Gun-toting ammosexuals wearing full body armor to protect against imaginary bullets refused to wear masks intended to protect themselves and others against a very real and threatening virus. So were fashionable dingbats in Trader Joes and Walmarts. Wingnut preachers were spitting hellfire from their pulpits against the “mask culture” as a form of slavery while entire congregations got infected and their brother pastors died from defying the guidelines. People were actually getting shot for barring entry to their stores by people refusing to mask up. This is a remarkable piece of self-destructive civil disobedience unique to the modern world.

Why? Because Coronavirus was a “Democratic hoax”. That’s what their duplicitous president and his enablers were telling them while they each got their own daily Coronavirus tests. Well-respected doctors and infectious disease specialists were smeared as anti-Trump politicians. The NIH and CDC were marginalized as Deep State agents of the Democratic Party. And the World Health Organization? Fuggeddaboudit.  It was painted as a bumbling, Euro-centric, commie organization which had misinformed a trusting Trump at every turn despite the fact that Trump publicly and arrogantly rejected their counsel and recommendations from Day One. It’s so crazy that one couldn’t even make up a story like this. But a lot of naive and poorly-informed people, a/k/a Fox News viewers, were buying it.

Primary among that disinformation is that Coronavirus is no different than the seasonal flu. Question: does anyone remember any time in US history when 150,000 Americans were killed by the flu? Or when cities like NYC had to lease 84 refrigerated trailers a/k/a “reefers” to store all the overflow bodies from their morgues because getting a reservation at a funeral home was harder than buying a weekend ticket for Hamilton in 2019? Except of course in 1918 during the so-called Spanish Flu (H1N1) Epidemic, which still owns the record for killing the most Americans in a single month: October 1918: 200,000.

Superficially, sure, Covid-19 looks like the flu. Both cause symptoms such as fever and body aches. Both are deadlier to people over age 65. Viruses that cause these illnesses spread in similar ways, mainly from person to person through respiratory droplets.

But that’s where the similarity ends. COVID-19 is not the seasonal flu. It’s much, much worse.

Covid-19 knocked the epidemiological community on its ass for a while because they’d never seen anything like it before. The more they studied it the more they saw that it was nothing at all like a flu virus, or even SARS1. Since then they’ve gotten a better picture of what Coronavirus does, how it spreads and most of all how it attacks the body’s systems with a roulette wheel of fatal causes. The latest best estimates show that COVID-19 is around 50 to 100 times more lethal than the seasonal flu.

One of the factors leading to this false equivalence by the Covid-deniers is the way CDC computes the CFR (Case Fatality Ratio) of the flu versus Coronavirus. Coronavirus mortality is “counted” while flu deaths are estimates because the vast majority of flu victims never go to a hospital. Estimates include any cause of death where the victim is suspected of having been exposed to flu, not whether or not he actually had the flu or that flu was the primary cause of death. How wildly different can those estimates and counts be? Here’s how: the estimated flu deaths for the current 2019-2020 flu season is 24,000-62,000 according to the CDC. But the actual counted death rate for flu during its peak month in May was around 750. These crazily different numbers come from the same source: the CDC.

But that doesn’t tell the whole story because epidemiologists believe that most Coronavirus deaths didn’t happen while patients were under a doctor’s care either. Therefore those deaths were never counted. Thanks to hospitals being the last place a sick person wanted to be during an epidemic, they died at home. They were picked up by EMS and taken to overcrowded morgues where overworked and often unqualified temporary coroners signed off on the most obvious cause of death: pneumonia, cardiac disease, kidney failure, etc. Then they were stacked and forgotten in reefer trucks parked outside. There was no time or lab capacity to test every dead body for Covid-19, especially when they didn’t have the resources to even test all essential workers. So those 15,000 counted deaths from Coronavirus could easily be 30,000 or more.

Using all available data, Columbia University says that Coronavirus has an infection-fatality rate of 1.46 percent, or twice as high as earlier estimates.  In other words, there will be 1.46 deaths for every one hundred infections. Let’s roll that back to 1% to make the math easier. And… surprise… it’s the same argument that right-wing Coronavirus deniers are using:

But let’s look at it from the standpoint of the Law of Large Numbers and a US population of 328 million.

If one percent of the population dies, that’s 3,282,000 dead people on top of the normal death rate. Three million dead people would screw an economy no matter what.

But it’s not just about deaths. What about the people who survive? They’re actually a much greater threat to the economy. When a person dies, the financial cost of the disease terminates too. But that’s not the case with survivors who continue to consume medical care, many at taxpayer expense, potentially for the remainder of their lives.

For every person who dies of Coronavirus:

In other words, if we treated this highly-contagious disease like the flu with nobody masking up or socially distancing themselves, “It’s only 1% fatal!” would become:

Remember, these numbers are based on a 1% fatality rate. It’s actually 1.46%. 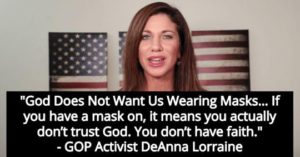 It’s not about “ruining the economy to save 1%.” If we reopen the economy with cases spiking as it is now, it will be destroyed more quickly and probably irreversibly. The US, let alone its economy, cannot survive everyone getting Covid-19. Even a herd animal on the Serengeti knows that instinctively.

It’s also not about government “moving the bar” or when these deprivations will end.  It’s when everyone will start cooperating, drops the bullshit political and religious noise and starts to take this threat seriously.  Then and only then will we start to end this thing. Mask up, socially distance and remember that before you’re a Democrat or a Republican or a Baptist or an atheist, we’re all trying to have a civilization here and none of us wants to catch this horrible disease.

Unbelievably, mask deniers are using countries which are safely reopening after a coherent national strategy, months of hard lockdown and public cooperation as rationale for the US doing the same (minus the national strategy, hard lockdown and public cooperation parts). There was a famous experiment at Stanford University in the 1970s on delayed gratification. Children were asked if they wanted one marshmallow now or two marshmallows if they waited. Early-reopeners want their two marshmallows up front.

So, back to Italy. After leading the world in Coronavirus infections for a couple of months, yesterday Italy reported just 252 new cases, less than did NYC. The country is well on its way to a complete reopening… except to Americans that is because we had 64,729 new cases yesterday. Even Canada is off limits to Americans now. We are more physically isolated from the world now than were the citizens of the former Soviet Union, all thanks to Trump dropping the ball when we had the opportunity to knock this virus out before it spread. Trump is hopeless so it’s up to us now. Until people start taking this disease seriously so we can start to eradicate it, this is indeed the New Normal for the foreseeable future.