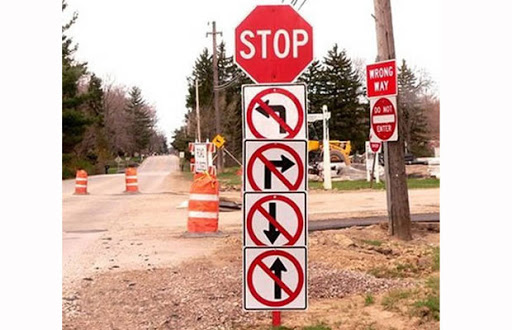 The USA is Now a “No Fly Zone”

This past Thursday Governor Cuomo issued a new order prohibiting bars from serving liquor without food. The order seeks to fix a growing problem of kids congregating on public sidewalks outside bars, making some NYC club avenues look like Mardi Gras. It also shuts down “walk up” bars which were permitted last month to throw a bone to booze-only pubs which were closed for inside business.

For several months, New York was not only ground zero for out-of-control Coronavirus infections, the daily numbers were worse than any country on the planet. With Trump having checked out of providing any sort of common sense national leadership role to address the epidemic, it fell to state governors to act.  NY’s Andrew Cuomo stepped up by providing a slew of new public health regulations and initiatives. It worked. The infections dropped dramatically from a peak of over 11,000 new cases a day to just 500+ in early July.

Last week, New York state fell to the 21st most active Covid-19 incubator in the country. All the self-righteous red states which had previously criticized Cuomo’s methods and quarantined New York citizens from entering their states were now suddenly themselves facing a rocketing infection rate.  Now they were quarantined by New York as their numbers matched and even exceeded New York’s historical worst. Florida reported 14,000 new cases yesterday, a new national record. And it seems like a foregone conclusion it won’t be the record for long.

In one those “That Was Then; This Is Now” moments exposing the relentless scientific and medical fraud committed not only by Trump but by his self-righteous enablers at Fox News, the Daily Show created a delicious montage of boneheaded lies, denials and brain farts that demonstrate what their real priorities are, and it isn’t public health. It’s to serve the failing re-election campaign of a sociopathic president whose callous inaction has led to the unnecessary deaths of 142,000 Americans. Spoiler Alert: Florida and Texas have been in the top three most-infected states since early June and both exceed NY’s total number of cases.

But New York’s good news was short-lived, as every public health expert warned it would be with the disease raging in most of the rest of the country. In addition, New Yorkers, primarily Millennials, were treating lockdown like a bad hair day.  When Cuomo opened the bars for walk-in service, they began to throw spring breaks outside those bars, mostly sans masks. There were over 25,000 complaints in NYC against bars and restaurants for such reopening violations.

So on Thursday, Cuomo slammed the door on walk-in bar service and reiterated extant rules that require bars to only sell liquor with food and to take responsibility for preventing illegal sidewalk drinking by their customers. Not only would violators be shut down, it was implied that their liquor licenses would disappear as well. Critics complained that the food rule could be easily circumvented by selling $1 cheese sandwiches with $10 beers. It’s a sterling example of missing the point of community action. Thousands of bars were breaking the intent of the rule which allowed them to reopen in the first place.

I posted that Syracuse.com news link to a Facebook Brooklyn food group yesterday and its admin demanded that I take it down because it was “too political”. I did and then resigned from the group. This underscores what’s becoming a bigger threat than the virus itself: the bullshit politicization of government’s effort to control the virus. Thanks to Trump, his enabling Republicans, a right wing media and cowardly people like that admin, it’s become not about making Americans safe but about some bizarre notion that social-distancing is more of a threat to the American way of life than a disease which has killed more Americans than World War 1. 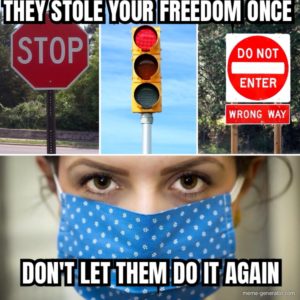 This is, frankly, insane. Proponents of these anti-masking/anti-distancing rules are worse than a suicide cult because they selfishly believe they have Right and “Freedom” on their side to endanger our lives as well.  Memes like the one to the left expose not only their callous, self-righteous attitudes but their blithering ignorance.  Seat belts only protect the wearer; a mask protects the rest of us from what is almost certainly unsafe hygiene by these deluded misanthropes.

This minority is what is driving the spread of Coronavirus in the US now and why my US passport is practically worthless. If you’re one of those cranks complaining about how these public health measures are crippling the economy, consider that only a tiny number of countries will accept Americans or allow their own citizens to fly here. How do you think that will affect our $1.1 trillion (with a T) tourism industry? Or our $250 billion airline industry?

Thanks to these idiots, the US had 75,000 new cases of Coronavirus yesterday.  That’s a 2,000 case increase over the past two days. That increase is less than the number of new cases for every other country on the planet. Let’s look at yesterday’s new case statistics for key countries which had their outbreaks within roughly the same 30 day period as we did:

Even India, which has a population almost four times that of the US had only half the new cases.

PrevPreviousMy Weirdest July Fourth Ever
NextNo, It’s Not The Flu!Next