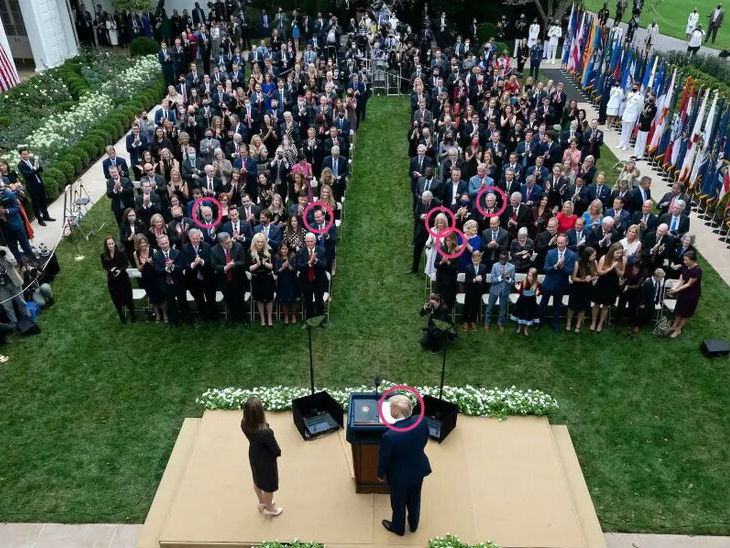 I didn’t know how to write this. I wasn’t even sure if I should because it’s a potential snake pit of cliche, karma, Schadenfreude and lucky sperm comeuppance. Trump was so clearly wrong about literally every aspect of his (mis)handling of Coronavirus since January that it’s hard not to sound high-handed and told-ya-so. It’s a story that in a sane world would never have cause to be written.

In the first presidential debate, Trump criticized Biden’s mask use as if it was somehow either cowardly or a campaign prop. This has been a theme in the Trump camp, lately by Fox Nation bimbo, Tomi Lahren, who tweeted that Biden “might as well carry a purse with that mask”, inadvertently reinforcing the masculine insecurity of her preening hero who wears a girdle and trowels on makeup and bronzer by the barrel full.

Donald J. Trump: (06:20)
“No, I think masks are okay. You have to understand, if you look… I mean, I have a mask right here. I put a mask on when I think I need it. Tonight, as an example, everybody’s had a test and you’ve had social distancing and all of the things that you have to, but I wear masks … I don’t wear a mask like him. Every time you see him, he’s got a mask. He could be speaking 200 feet away from him and he shows up with the biggest mask I’ve ever seen.” 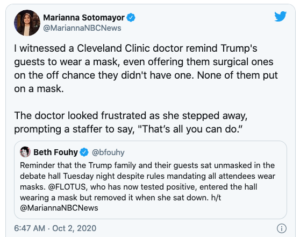 Well, look who has Coronavirus and who doesn’t.

Trump’s claim that everyone on his team had been tested and was social distancing was just one of scores of self-evident whoppers he told on that stage. His family in the audience was obviously NOT social distancing nor respecting the rules established by the venue’s host, the Cleveland Clinic, to which Trump and they had earlier agreed. They arrogantly refused to wear the masks offered to them by the clinic’s staff in a vain attempt to coerce their compliance. Not #FakeNews — this was shown on live television. In some part of the Trump lizard brain, wearing a mask is apparently a sign of weakness. Trump cabal’s pushback painted a stark contrast to Biden’s own family and entourage, who remained masked for the whole 90 minutes of that dumpster fire of a debate.

As it turned out later, Trump hadn’t been tested that morning, which again was one of the rules he agreed to and imperiously ignored. It was obviously the same with Melania, and I’m guessing every maskless Trump spawn in the room.

How do we know this?

Because only 48 hours later Trump tweeted that he’d received the greatest karmic bitch slap in political history. After nine months of actively playing down the virus as just a “flu” and a “hoax” that would “disappear tomorrow” which only “those with preexisting conditions caught“, after failing to order even a small fraction of the national emergency measures taken by even his “shit hole countries”, after mercilessly smearing Democrats and governors who urged the public to take the pandemic seriously, Trump became US COVID-19 statistic #7,531,XXX. And his wife became his plus one. Regardless of whatever sympathy one might feel for the Trumps, one can’t begrudge the cosmic irony.

Here’s the thing about SARS-CoV-2: the time from initial exposure to the onset of symptoms is three to 14 days, though symptoms typically appear within four or five days after exposure. That’s important to establish the time line of WTF happened here and when.

POC “snap tests”, which the White House has allegedly been using to test senior White House staff every day is, while considerably inaccurate with false positives, a coal mine canary. Antigen tests are extremely sensitive and err towards positive. A positive result means that that the patient should immediately quarantine before being tested again a few hours later. That inaccuracy actually has a silver lining. As the NIH says, and as I wrote about on Sept 26, two POC tests followed back-to-back increase the accuracy five-fold. If the first test has a 20% inaccuracy towards positive and the second test agrees with it both are only 4% inaccurate. Then 0.8%, etc.  So why haven’t we heard about these tests being done?

In fact that “four or five days” of viral incubation in Harvard Medical School’s assessment puts Trump’s likely infection back to that foolish, carelessly-undistancing Saturday Rose Garden party for Trump’s SCOTUS pick, Ame Coney Barrett, who coincidentally was diagnosed with Coronavirus this summer. More press inquiries nailed her diagnosis down to “late summer”. 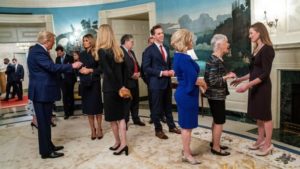 At the risk of getting sucked down another Trump rabbit hole, exactly when in “late summer”? Because it was “late summer” until September 21, just five days before the White House Rose Garden superspreader that’s now produced 21 confirmed cases of Coronavirus and 2 hospitalizations. We know her husband had Coronavirus in mid-August. If she caught it from him then there’s a good possibility that she was contagious in September. The White House refuses to specify the actual date that Ms. Barrett was diagnosed. If it was during the week of September 14, then she had no business even leaving her house let alone swapping cheek kisses with the GOP elite. CDC guidelines are that people conditionally diagnosed with even asymptomatic Coronavirus quarantine for ten (10) days, or 10 days after any symptoms subside. Deputy White House press secretary Judd Deere said that Barrett was following “CDC guidance and best practices, including social distancing, wearing face coverings, and frequently washes hands.”  Except she wasn’t because she was unmasked at the garden event. An event that size wouldn’t even be permitted in NY state, with or without PPEs.

But, back to Trump. It’s fairly obvious that the only reason he  got tested on Thursday was because he was showing symptoms. Trump had said for weeks that he and his senior staff and family were tested the first thing every morning. A POC test returns results in just fifteen minutes. If Trump, Melania and Hope Hicks had been tested Thursday morning their positive results would have returned around noon  Yet Trump fired off that tweet nearly thirteen hours later at 1am, after setting up Hope Hicks’ positive test as a media distraction for his own.

The timeline simply doesn’t support Trump’s fabrication of the facts.  In fact the only person who had recent contact with all those currently diagnosed with Covid is Donald Trump. And rather than show some humility for that strong possibility, he returned to the White House that’s seen a dozen staffers come down with the disease still contagious, removed his mask and proclaimed that people shouldn’t be afraid of a disease that’s on target to kill more Americans than any US war in history by December. Truly shameless and depraved.