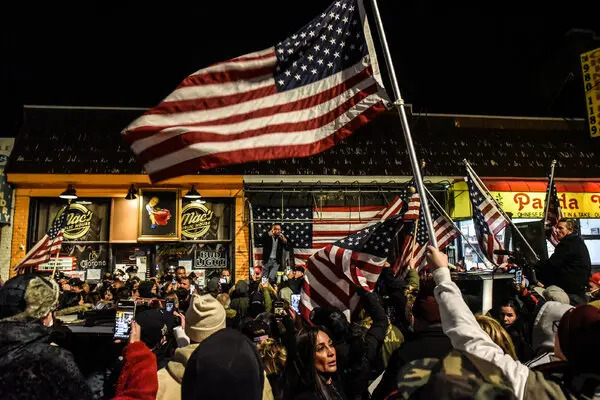 It’s a ridiculous battlefield to die on. Mice don’t deliberately provoke cats. Wildebeest don’t play chicken with packs of hungry Serengeti lions. That would be insane, right? Self-preservation is at the genetic core of practically every living thing. We learned that in grade school. So what’s the explanation for such self-destructive behavior from what is supposed to be — or at least likes to believe it is — the  dominant and most intelligent species on the planet? Wear a mask, jackass!

On NYC’s Staten Island, the borough currently suffering the worst Coronavirus infection rate in the city, with a positivity rate twice that of neighboring Brooklyn, bar owner Danny Presti flouted the state’s emergency social distancing orders by illegally opening his establishment for inside drinking, without masks or social distancing, partying like it was two decades ago. This was after the bar had already been fined for doing this the previous week and after it had had its liquor license suspended.  And after he had arrogantly declared his business an “autonomous zone”, protected from any and all laws. Not surprisingly, he got arrested and his workers and patrons fined.

After his release, Presti once again reopened his bar and hundreds of sympathetic but equally brain dead, flag-waving Semper Fries poured into the street to show their support for his pathetic, lawless and defenseless cause.

Last night, sheriff’s deputies returned to the bar and, after witnessing that it was still operating illegally, waited in the parking lot to arrest Presti again. Presti evaded arrest, hopped in his car and struck one of the sheriffs, who is in Staten Island University Hospital with several broken bones.  Presti is in jail again awaiting formal charges from the DA which will likely include assault with a deadly weapon on a law enforcement officer, resisting and evading on top of the original charges.

In Oregon, a state which recorded some of the earliest cases of COVID-19 in the country, Dr. Steven LaTulippe addressed a pro-Trump rally and told it that neither he nor his staff wears a mask while working in their clinic. Oregon closed his office and suspended his medical license indefinitely.

In Washington, after having willfully been at the core of at least three Coronavirus super-spreaders, one of which infected his wife and two of his sons and put him in Walter Reed, Donald Trump announced that there would be a dozen more such events inside the White House during the Christmas season. This is despite the US Secret Service reporting that more than 130 of its agents are infected with COVID-19 and is pressed thin to ensure security at these events.

What’s behind such dangerous, self-destructive and frankly completely idiotic behavior?  Most of us have probably heard the term “Republican politics of destruction” but has it actually devolved to self-destruction? Apparently so. An angry Trump and his cranked-up parrot house have become like a circular firing squad of stupidity pretending that their rebellion against simple, common sense public health measures is some nebulous act of patriotism and freedumb, even as people are dying from their inane acts of defiance.