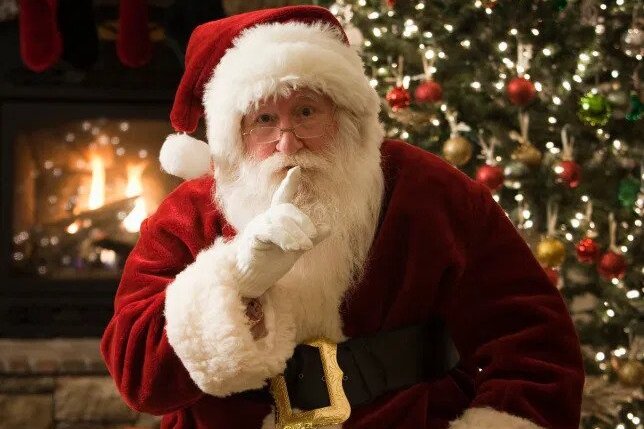 Thanks to Trump’s legal Dream Team and Texas Attorney General Ken Paxton, we now have huuuge, overwhelming evidence proving the existence of Santa Claus and the greatest fraud ever perpetrated on the world’s children… not just that the jolly fat man actually exists but so do flying reindeer, elves, a North Pole workshop with greater industrial output than Apple, Samsung and Toyota combined, all of it!

It’s buried deep in the impenetrable legalese of STATE OF TEXAS v. COMMONWEALTH OF PENNSYLVANIA,STATE OF GEORGIA,STATE OF MICHIGAN,AND STATE OF WISCONSIN:

Despite the chaos of election night and the days which followed, the media has consistently proclaimed that no widespread voter fraud has been proven. But this observation misses the point. The constitutional issue is not whether voters committed fraud but whether state officials violated the law by systematically loosening the measures for ballot integrity so that fraud becomes undetectable.

Evidence, even the “We have so much evidence, we don’t know what to do with it” evidence, can in fact be undetectable! This is the argument that Texas intends to bring before the Supreme Court where it could, I guess, potentially set a new precedent rewriting the Rules of Evidence. Is it evidence both when you can present it and evidence when you can’t? Ken Paxton says that it is. Schrödinger’s cat could actually become real court room law!

In fact, Paxton’s complaint says that merely an allegation of official misconduct is enough to conclude that massive, state-wide, third-party fraud occurred. Paxton knows something about fraud. He’s been under indictment for securities fraud for the past five years.

The author of the suit also intends to blow the doors off the conspiracy of mathematics with this statement:

“The probability of former Vice President Biden winning the popular vote in the four Defendant States — Georgia, Michigan, Pennsylvania, and Wisconsin — independently given President Trump’s early lead in those States as of 3 a.m. on November 4, 2020, is less than one in a quadrillion.”

If you’re confused by that number, it’s a ‘1’ with 15 zeroes after it. And if you’re also confused by the logic of the argument you have a right to be. He’s reduced popular elections and every vote from these four defendant states to a simple coin toss: a game of random chance, not voter intent. But only with just these four states, and again with zero evidence of wrongdoing by anyone.

This isn’t just the madness of a state AG currently under FBI investigation for bribery wanting to endear himself to Trump in order to win a seat on Trump’s pardon train (watch your luggage, Ken!) He managed to compel 17 other red states to sign on to it as well. Paxton’s intent is to have all the votes in those four states tossed out. Other than the fact that Trump lost those states they have something else in common. They all have Republican legislatures which would be called on to vote for the state electors for the next president.

Seriously, just as the last four years have made comedy writers lazy and almost superfluous, this is an absurdity that no publisher of political thrillers would have bought pre-2016. It’s as if, as my friend Ed Barnes noted, Texas sued itself and intentionally botched the prosecution so it could lose the case but prevail on the issue. 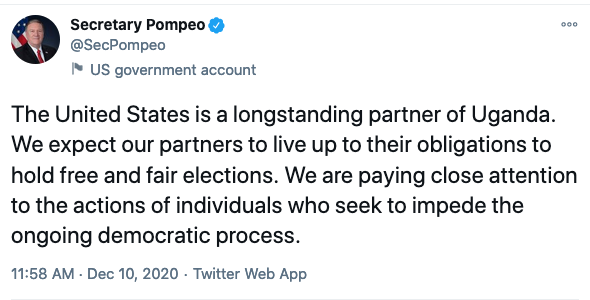 If this pseudo-patriotic sanctimoniousness isn’t appalling enough, read Mike Pompeo’s pompous warning yesterday to the Ugandan government about free and fair elections and the “democratic process”. I bet the Kampalan government laughed even harder than I did when I read that. And, not for nothing, since when is Twitter considered a diplomatic channel? Would this malfunctioning machine even be able to communicate outside the Trump bubble without Twitter to deliver its edicts, threaten its foes and terminate the jobs of its unwanted?

This SCOTUS cock-up will fail on several fronts, not the least of which is that presidential elections are each run by the states and Texas has no standing to sue another state for allegedly violating its own constitution. Nor can Texas prove damages to itself, which is normally the bare minimum requirement for pursuing a civil suit even against an incompetent parking lot owner.

As if to underscore how dishonest and batshit crazy the Trump-branded GOP has become:

No comment other than that January 20 can’t get here fast enough.

Followup: an hour ago, with a single terse paragraph, SCOTUS rejected hearing Paxton’s case using the lowest hanging fruit on his poisonous tree, which was mentioned above: no standing. I also think Paxton misunderestimated Trump. He has no tolerance for “losers”, which is anyone who fails him no matter if they even go to prison for him, i.e. Michael Cohen. Warm up your criminal defense, Ken. No pardon for you.