Home » Is Telecommuting the Future of Employment?

Is Telecommuting the Future of Employment?

Lots of speculation has been made about the Post-Covid World and the cliche “new normal”.  The fact is, nobody knows. This pandemic is a unique event in the modern world. We have nothing to gauge it against.  9/11 created a paradigm shift in how we interact with the world and view the global social fabric. I think COVID-19 will be even more impactful.  Assuming we all get out of this alive, one of the things this tragic event has been is a test-under-fire of telecommuting for mission-critical jobs and an audition for the employment model of the future. Remote working is something that has the potential to yield huge benefits for employers, employees and even municipal budgets but could also prove problematic for many workers.

Unlike “the economy”, which I have less credibility to speak about than String Theory, remote working is something I can write about with some expertise. I’ve been working exclusively from home since 2003 and through most of the 1990s as well.  In fact, it’s the only way I’ll work. I have a comfortable home office with an Aeron chair, perfect work lighting, zoned air-conditioning and the tools I need to do my job, all selected by me: a loaded, multi-monitor Mac Pro desktop computer with an Ubuntu Linux public server, a high speed fiber connection and all the licensed support software I need. I even have a backup dev network just in case.  My animals are snoring peacefully around me, my kitchen is better stocked than any company break room and if I need a mental reset, I have a nice back yard and a park a half block away.  It’s pretty much no contest.

I’m at least twice as productive toiling in my homebrew environment than I’ve ever been in an office setting, and not just because I can use the 2+ unpaid, unproductive hours I’d otherwise spend commuting to/from a job where I would login to the same network I can reach from home. That’s 14+ more hours/week of work which costs the employer nothing but which I’m happy to give him in lieu of not having to stand on a freezing subway platform or being jammed into a sweltering D train petri dish. It’s also not having to deal with the aggravation of office distractions, useless meetings and an officious “Microsoft only!” / “Only senior staff get multiple monitors” / “You need authorization for root” environment.  For the few office gigs I’ve had I always felt like I was working with my feet in a bucket of cement, with way too much productivity-killing background noise.

An MIT study found that as of early April 2020 34% of office-bound workers had been sent home to do their jobs remotely. With 15% of workers already working remotely that means that half the country are telecommuting now. Companies have been forced to find ways to accommodate their new distributed workforces with video conferencing and instant messaging, improving communications between working groups, more focused project management and lots and lots of email. If one can assign “fortune” to this pandemic it’s that it happened today and not 25 years ago. Cable broadband, Dropbox, Google Docs/Sheets, Zoom, Bluejeans, Jira, AWS and other modern technologies have made remote work not only possible but more efficient. Companies would have been SOL if this had hit us in 1995.

What I’ve found during this international self-distancing experiment is that there are some people who thrive at remote work and others who hate the isolation or fail without a manager walking on their heels. The same goes for companies.  Amazon, Chewy and Sweetwater are companies with which I regularly do business and they’ve barely hiccuped during this crisis. MacSales, Instacart and Madison Office, not so much although Instacart seems to be making adjustments to service increased demand. EmpireWine.com seems to be even more efficient than before, but enough about that.

A lot of responsibility has fallen not just on rank-and-file employees to continue doing their jobs from their dining rooms but on management to find ways of making the doing of those jobs easier and more productive in this remote environment. What I’ve seen is that organizations with old school “butts in chairs” management practices are in trouble while managers who focus on project milestones are doing a much better job at it. Honestly, the latter is how it should be done. Sitting up straight at your desk at 9am doesn’t make the company any money.  What you do with those hours does.

A word of warning to those workers and managers who aren’t performing now: you are possibly auditioning for your own job in a post-COVID-19 world.

The reason is bottom line.  Here are the current commercial rent averages for Manhattan (per square foot annually). 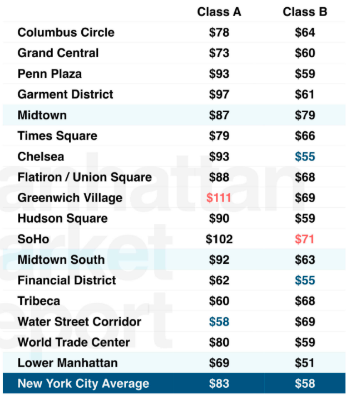 Employees have a cost to employers over and above their salaries, taxes and comp packages. One of them is office space.  When you add in common space, a typical tech cube is ~200 square feet. That means the average cubicle costs a NYC company an average of $16,600/year in rent. Multiply that times 50 employees and it’s costing your NYC employer over $800,000 annually just to give you and your fellow employees space to park your bodies forty+ hours a week. This doesn’t include additional costs like HVAC, utilities, insurance, cleaning and maintenance, conference and break rooms. Suffice to say it’s well into seven figures.

This Coronavirus event has shown that telecommuting works for a lot of companies. If yours is one of them it won’t take long for your boss to realize that he or she can move a lot of cash from one side of the ledger to the other by keeping employees working from home and downsizing office space.

Granted, rents outside the Big Apple are significantly cheaper than here but so are telecommuting employees. A $150k/year computer programmer in Manhattan can be had for half that amount in the heartland. That’s something you can’t do much about unless you want to move to a cheaper flyover state. But from an employer’s POV, his remote worker candidate pool is national, even international. For instance, I work with an Austrian CSS developer who lives on the Costa Blanca in Spain.

Here’s the money shot: if you’re not performing well as a telecommuter now, you had better get to work on that because it could soon be an important item in your 2020 employee review: how well you function remotely.

Last week, my Denver cousin got an email from her boss congratulating her for carrying the ball during this crisis and telling her that her position is now permanently remote. Our CEO confided in a former CIO that he’s exploring options for a smaller office footprint next year, just as I think many senior executives are doing now. Problem is, I know some people from my own company who probably won’t be with us going into 2021 because of their poor performance and lack of initiative shown as remote workers during this crisis.