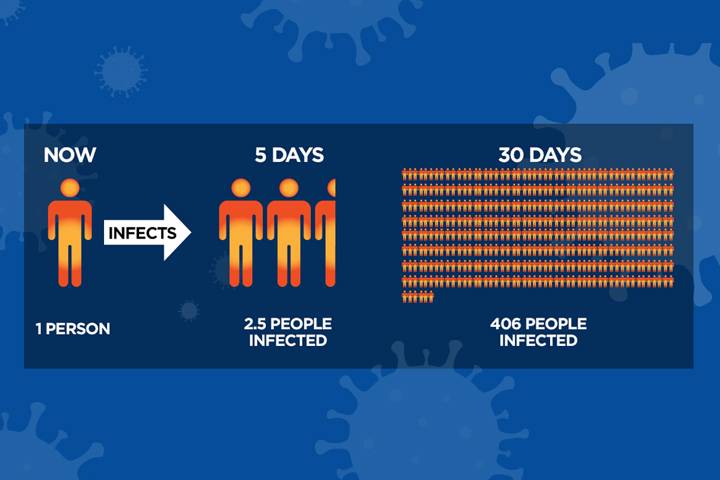 Greetings from NYC, the hottest of American hotbeds for Covid-19.  For a guy like me who’s worked from home since 2005 and who hates physical shopping, I’ve adjusted to self-distancing better than most. I miss my evening restaurant and bar hangs, of course. On the other hand, I’m saving a small fortune in liquor bills because solitary drinking has never been my thing.

This pandemic has given all of us a unique perspective to see how people respond to life in a bubble. I’ve been surprised by how well most of my friends and neighbors have adjusted to it. Some restarted old hobbies, some are woodshedding on stale musical instrument chops, some have overcome computer fears and become more active online, many have come out of their shells and are initiating contacts they never would have before. Everyone is anxious of course but most people are letting their brains work it out.

It has also predictably exposed the dark side of those predisposed to mindless antisocial behavior, reminding us once again of the cognitive dissonance festering in the 50 percent below “average intelligence”. Despite this epidemic being completely in the wheelhouse of the medical professionals and scientists, the wingnut media has once again latched on to an apolitical issue in an attempt to politicize it and use it to mobilize their drone armies. It’s not surprising given that they’ve done this so many times with issues which have no left/right political component, like global warming, alternative energy and carrying loaded weapons into schools. It even manufactured ridiculous hissy fits against non-incandescent light bulbs and “windmills”.  Now they’re riling up the rubes against self-distancing, demanding that government ignore virtually every medical expert on the planet and “re-open the country” even as the infection rate continues to soar in most of the US and those same scientists discover even scarier dimensions to the disease. 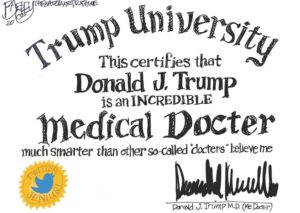 Idiots. Led by its Idiot King: the business super-genius with six bankruptcies and 30 failed companies just since 2000, who knows more about everything than anybody who’s ever lived. Naturally, he also thinks he knows more about contagious disease than the world’s medical experts too.

What some on the far right are demanding is the equivalent of suddenly falling out of an airplane and plunging towards the ground, realizing that you have a parachute, pulling the rip cord and then saying, “Hey, I’m slowing down. Guess I can unbuckle it now!”

Wingers: everybody understands your issues, okay? We’re all in the same boat.  Millions of people besides you are broke and out of work too.  But we’re taking our counsel from medical professionals, not tedious bible school dropouts on Foxnews and “I’m a social scientist” pissboys working for Donald Trump.

Here’s the thing: if Trump and the Republicans actually cared about working class stiffs they would have written a relief bill that actually relieved them and not packed it full of welfare handouts for corporations and the rich.  How many millions of struggling families could have been helped with the $90 billion in stealth tax cuts for millionaires that McConnell slipped into the Coronavirus relief bill at the 11th hour?

This isn’t all that surprising insofar as without rabble rousing campaigns like this the American right wing has nothing else to sell. No public policy agenda, no jobs bills, no healthcare reform, no middle class tax relief, no small business incentives, no core principles, no connection to its past. The shelves are as empty as the toilet paper aisle at Stop & Shop. Republicans haven’t had a fresh idea, even a bad fresh idea, since the 1980s. And that was Trickle Down, one of the worst of those bad ideas. Despite it having been proved a failure over 30 years ago, the GOP keeps recycling it. And Republican cult followers keep buying it. That’s what holds the Republican party together today. Repetition and rainbows to create the smokescreens needed to hand over more taxpayer revenue to the party’s masters. It certainly isn’t based on any of the values held by the Republican Party when America Was Great… certainly not with regard to the debt and deficits Trump has run up, his cozying up to religious kooks, his law enforcement obstructionism, his obsequious pandering to tyrants and America’s longtime enemies and his trying to usurp constitutionally protected states’ rights.

I’m not an MD either but I do work in public health and with doctors who, unlike the Pampered Pubescent, are putting their lives on the line every day to help the victims of this terrible virus. I know the stakes as well as the weak inventory of weapons we have to fight Coronavirus.  I know that our only defense against this disease now is self-distancing and following some fairly simple rules of hygiene until it subsides. Or, as per the simile above, our feet touch ground. We need to listen to the medical experts and give them time to develop the tests, treatments and vaccines to deal with this threat or it will be with us for years to come.  If they don’t understand the disease yet, what makes you presume that Trump does?

It’s utterly mindless to consider reopening the country when the disease is still ramping up in the heartland. Just three days ago, Oklahoma had a 53% increase in infections over the previous week.  Cases jumped 60% in Arkansas, 74% in Nebraska, and 82% in Iowa. South Dakota saw an incredible 205% spike. What don’t these GOP boneheads understand here? Do they think that math has a liberal bias? They’re setting up the country for a catastrophic Second Wave. I know Trump is ignorant of this but surely some of these governors must have read about 1918 H1N1 pandemic and how the vast majority of deaths occurred after the country re-opened too soon.

Do these complaining snowflakes really not appreciate that it took just 17 days for the SARS-CoV2 virus to migrate from a far flung province in China to the outskirts of Seattle, Washington? How many hours do they think it will take for it to migrate back to the Northeast and West from Atlanta, Houston, Des Moines and Rapid City? And then back to their own front doors?

PrevPreviousThe Hypocrisy of a Trump Crisis Response
NextIs Telecommuting the Future of Employment?Next