Home » The Hypocrisy of a Trump Crisis Response 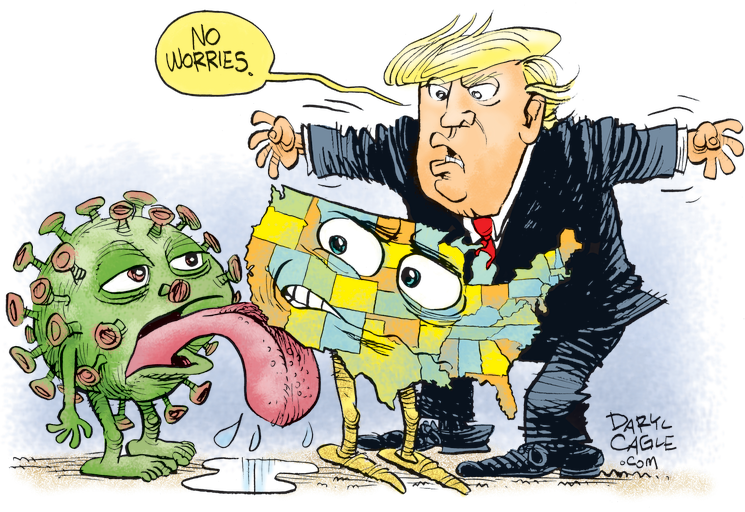 The Hypocrisy of a Trump Crisis Response

Hunkered down in my Brooklyn home, at yet another NYC Ground Zero, reading Surgeon General Jerome Adams’ warning that this week “is going to be our Pearl Harbor moment, it’s going to be our 9/11 moment, it’s going to be the hardest moment for many Americans in their entire lives“, gives me an excellent perspective to look back at the wanton lies, ineptitude and utter uselessness of Donald Trump during this Coronavirus crisis. How did we get here from there?

There’s no doubt in anyone’s mind, not even in those of his most obsequious drones, that this will be the defining moment of Trump’s presidency. His tainted election, the Russia probe which sent many of his minions to prison, the horrors inflicted on immigrants seeking sanctuary on the Mexican border, his idiotic tariffs and tax cut which failed to produce, they all take a back seat to this. Trump rates his response a “10” but America has instead seen a president who hasn’t even shown up at the pageant. It’s something he can’t bully his way out of or dismiss with a childish nickname or neutralize with a rally slogan. It can’t be brushed off as a “hoax” or “Fake News” or a “Democratic witch hunt”, although he certainly tried. While attempting to treat Coronavirus as a political issue, he wasted precious time needed to to deploy a coherent and effective strategy to confront this epidemic. In doing so, or failing to do so, he in fact became the infection’s unwitting partner and stooge. His inaction and utter lack of leadership gave the virus the opportunity it needed to create this Pearl Harbor moment.

Much will be written in the coming years about Trump’s missed opportunities to not only mitigate the impact of Covid-19 on the American public and its economy (the other shoe waiting to drop) but by squandering a selfish opportunity to boost his own political capital going into the 2020 election where he’s an underdog. Instead, he effectively ceded presidential leadership to the governor of New York, Andrew Cuomo, who he then petulantly attacked for not doing the very things Trump was expected to do and failed to do.

Let’s ask a 2014 Donald Trump what he expected of a US president during the threat of an epidemic:

In 2014, there were eleven cases of Ebola virus and two deaths in the US and Trump demanded that President Obama resign over it.  Today — today, not tomorrow, not the coming Pearl Harbor week — there are 336,851 confirmed cases of Coronavirus in the US, 9,620 deaths and Trump says that he’s doing “a great job!”

Trump’s cult protests, “What could he have done to stop it?”  Are you kidding me?? He could have started by putting some experienced adults and medical professionals in charge, not an idiot like Pence whose history of failure and inaction with the AIDS epidemic drove Indiana’s Scott County’s infection rate to one of the highest in the country. Pence’s most notable contributions as Trump’s Coronavirus Czar has been to classify the minutes of their meetings and to begin them with group prayer. Then Trump compounded that stupidity by appointing his idiot son-in-law to help, a man who’s accomplished nothing in his three years as Trump’s lapdog except to enrich himself.

Trump cultists then what-about Obama putting a lawyer and political operative, Ron Klain, in charge of his Ebola task force.  Yes, someone with chief-of-staff experience who knows how to delegate and juggle several balls at the same time and who immediately put the CDC and NIH in the driver’s seat. Contrary to Trump’s bullshit “travel ban” which doesn’t even apply to US citizens, he ordered screening and testing of everyone arriving from infected countries, Americans included. Ebola testing labs were quickly set up and the number of hospitals trained and equipped to handle Ebola patients was quickly increased from three to fifty one. The federal government put a rush on pharmaceutical companies to develop a vaccine, which they got to Phase Two trials in a matter of weeks. And he developed a 50-state policy to defeat the epidemic, which is something that Trump has still failed to do over three months later.

What we have is Trump still gaslighting about Chloraquine, an old malaria drug.  This is despite his own director from the National Institute of Allergy and Infectious Diseases, Anthony Fauci, someone who’s managed every disease threat to the US since 1984, standing on that same stage with Trump saying that there’s no practical evidence that it works against Coronavirus.

Stay safe, folks. The road gets bumpier from here and nobody is driving the bus.