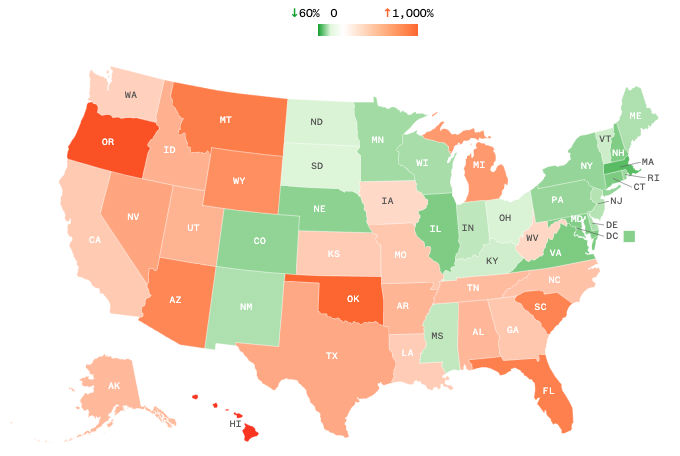 A Tale Of Two Covid-19 Americas

Meanwhile,1350 miles to the southwest of NYC, Oklahoma’s Coronavirus infections are increasing and are at record highs. Like a suicidal mouse flipping off a hungry cat, Donald Trump chose Tulsa for his personal “reopening”: the restarting of his Trump medicine shows from which he derives so much interactive validation from his cult-of-stupid.

Much snide humor has been written about the overwhelming failure of Trump’s Tulsa comeback at the BOK Center:

This article isn’t about that.  It’s about something far more serious: the comeback of the virus. Or rather the fact that it has never left. 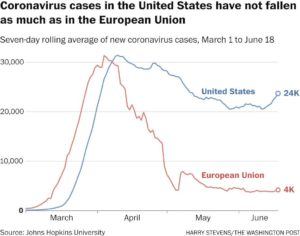 When we looked at Covid-19 infections for the entire US back in May we saw a gently falling curve. That was good news. But let’s map that curve alongside that of the 446 million citizens of the European Union, which was hit just as hard as we were by the pandemic and around the same time. Then let’s add June.

That chart is far less comforting. While infections in the EU dropped off sharply in late March and leveled off at a fairly low number of daily infections, the falling curve in the US was shallow and much less dramatic. Worse, since late May, the US curve has done a 180 and has started to climb back up again as states — primarily red states falling in line with Trump’s election year pleas for premature normalcy — began early reopening. As of last week, the daily US infection rate is 6x that of the EU.

One of the first signs that things weren’t as rosy as they seemed was in Worldometer’s state breakdown of new Covid-19 infections. New York, which by virtue of its population density and gateway connections to the world had occupied the #1 slot for four straight months, suddenly started sinking, replaced by early-opening states like Florida, Texas and California. As of yesterday, New York is #9 for new cases. But that doesn’t tell the whole story because those new cases aren’t proportional to population.

Granted, that New York Times article is a month old but, if anything, the picture is even more bleak today with more states opening up and reporting record infections and New York’s new case rate continuing to fall.

This is almost entirely due to a complete and utter failure in national leadership, a/k/a Donald Trump.  One can fairly say that people are responsible for their own poor decision making w/r/t social distancing. But this bad behavior hasn’t been without dog whistles of support from Trump and his cabal, including Trump’s own refusal to wear a mask at public events and the insanity of actually blaming testing for the high number of infections, as he quipped in his disjointed speech on Saturday. That’s despicable given that twenty-nine states and U.S. territories showed an increase in their seven-day average of new reported cases on Monday, with nine states reporting record average highs.

We remain the only OECD nation — perhaps the only nation on the planet — without a coherent national strategy to combat this epidemic. The infection and fatality numbers show just how badly this failure has been. But they also point to the inevitability of a second wave that will slap back at urban centers like NYC, possibly as early as August.

Call me a pessimist but I placed a new order for masks, alcohol wipes and hand sanitizer while the stocks are back in the stores. Nobody will be happier than me if I’m wrong.

PrevPreviousNo, It Doesn’t Mean What It Says
NextDoes Trump Deserve Another Term? Seriously?Next