Home » No, It Doesn’t Mean What It Says 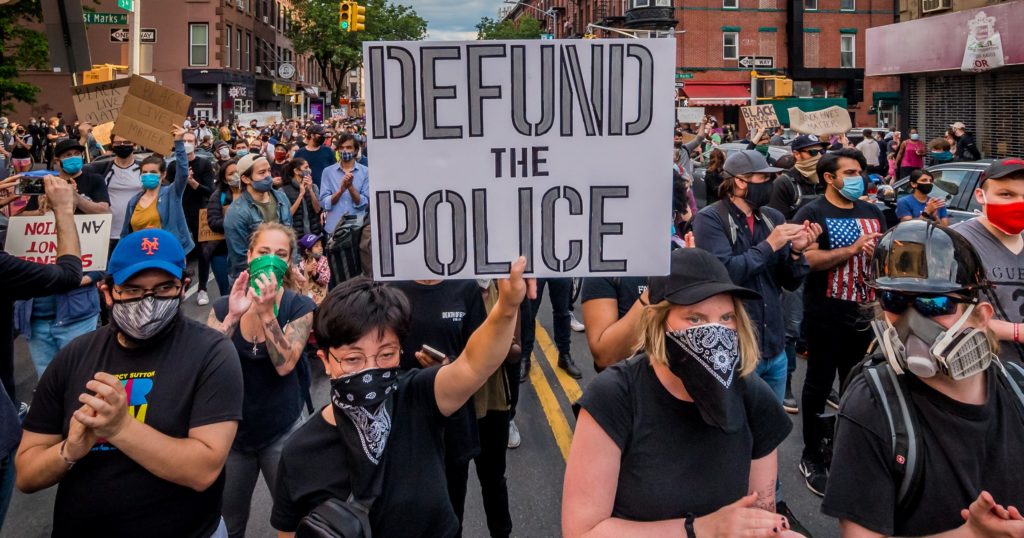 No, It Doesn’t Mean What It Says

The “Defund the Police” chant was heard at protests all over the country last week and then hyped by right-wing media shills desperate to distract viewers from a growing list of political liabilities which don’t bode well for Republicans in November:

Presto, now the King of Israel is the Law & Order President. This is the same Dudley Doright who’s been named in 195 federal suits, was the defendant in 1,450 civil suits, was subjected to over a hundred tax suits and three dozen NYS tax liens and has 25 credible women accusing him of sexual assault, including an ex-wife. He’s also paid over $40 million in fines for fraud and illegal acts, from Trump U to Trump Foundation to DOJ judgements for racist housing practices (twice) to racist employment practices to money laundering in Atlantic City.  And, lest we forget, Michael Cohen went to prison for doing what Trump ordered him to do.

But now he’s the Law & Order President. Sure. Anyone who still takes this poser seriously, I have a great deal on a bridge for you here in Brooklyn. But enough about this mook.

Defunding the police, taken literally as a call to abolish the police, is obviously an idiotic idea that serves no one.  Except for Donald Trump and Millennial grasshoppers who believe any Twitter hashtag broadcast via Moscow-based Berniebots, it doesn’t mean that either.

But just as obviously there are more than just a few “bad apples” in the PDs.  Every industry has them, including yours, mine and the military. But we should strive to have none in law enforcement. These are after all armed men and women given the power of arrest and sworn to uphold the law and protect the public, not beat and gas them for expressing their First Amendment rights or killing them for attempting to sell a cigarette. Imagine if at the scene of an aircraft disaster an AOPA (pilot’s union) spokesperson said “Sure, there are a few pilots who like to fly their planes into mountains but most want to land them safely at airports!” How eager would you be to get on a plane? That’s essentially what the “only few bad apples” alibi is saying. And that’s essentially what police union presidents also said last week, except without copping to the bad apples.

We should neither defund the police nor besmirch those cops who are trying to do a good job. That’s frankly as ignorant and despicable as believing that all African Americans are criminals and all Latinos are welfare freeloaders. I know a lot of good cops and good cops know there are bad cops in the departments who never should have been cops. Even some police chiefs are coming around to this.

When I moved to NYC it was during the time of the Knapp Commission in the wake of Frank Serpico‘s testimony about institutional police corruption. Whitman Knapp was only partly successful.  A few line cops were fired, a few commanders were transferred, regulations were passed that actually made it harder for honest cops to do their jobs. Corruption and racism went undercover but never left.

A thorough housecleaning is in order along with fundamental structural changes.That’s essentially what the unfortunately thumbnailed “Defund The Police” means, at least to responsible legislators.  However, the right wing would rather mire it in a stupid semantics argument than address the salient issues that need to be addressed.

Police departments across the country are feeding on increasing budgets against decreasing crime rates. They’ve been spending that cash, and their 9/11 DHS grants, equipping and training themselves for paramilitary operations with surplus Bradley Fighting Vehicles, high tech surveillance gear and expanding use of SWAT for ordinary police encounters like warrant services. The tiny city of Neena, Wisconsin has a 30-ton armored combat vehicle. The Los Angeles Schools Police have a Mine Resistant Ambush Protected armored vehicle with grenade launchers. NYPD even has an unmarked, dedicated stealth helicopter with a reported $20 million in high-tech surveillance and jamming equipment aboard.

As we saw in last week’s protests/riots, escalation begets escalation. However the cops’ mission with those angry crowds should have been de-escalation and restraint and focusing its law enforcement attention on the actual troublemakers. In case we’ve forgotten, the riots began over grossly excessive use of police force and that pattern repeated itself in city after city with otherwise peaceful demonstrators being physically attacked by cops with tactics more applicable to a hot battlefield than Main Street. Many non-rioting protesters suffered horrific wounds from being hit in the face with rubber bullets, beaten with riot clubs and wrestled to the ground by eight hundred pounds of heavily armed cops.  At least one peaceful demonstrator, 22 year-old Sarah Grossman, was killed by tear gas — and, no, it had nothing to do with any preexisting condition. Columbus cops ignored safety procedures and blanketed demonstrators with tear gas far in excess of crowd control guidelines. The police over-reaction to what was overwhelmingly a peaceful protest looked more like Tiananmen Square than Capitol Hill or Barclays Center.

There were many takeaways from those riots: legitimately angry African-Americans being targeted every day with over-the-top enforcement, frustrated people resenting months of Coronavirus lockdowns and sudden joblessness, Americans increasingly intolerant of this bumbling and corrupt president, dumbass kids looking for a street party and a night of easy thievery, white nationalist agitators hoping to provoke an aggressive police response, a media easily distracted from other stories of greater importance and one more: excessive law enforcement reaction.

My buddy, Ed Barnes, and I talked about some of this last year. Ed believes, and I agree with him, that police have no business dealing with mentally-disturbed people and the homeless. They aren’t a crime problem. You can’t fix schizophrenia with a baton nor make a homeless person safer by forcing him out in the cold.  For their part, cops don’t like doing EDP (emotionally disturbed person) calls either. They are neither trained for this nor have the skills or services needed to deal with it. Deploying cops to handle a bipolar individual screaming at the moon is just using a hammer to fix a loose screw.

Does NYC really need 36,000 cops when our crime rate is at 1960s level and we have a homicide rate that’s the lowest it’s been in 70 years? Take some of that $6 billion NYPD gets every year and build a new street-response unit of social workers and MPHs to take those calls. Convert some of those empty jails to mental health facilities and empty, city-owned tax-default properties to homes for the homeless.

That’s what “defunding” looks like.  Put cops back on a crime-fighting mission.

I’d take it one step further: create a new department under NYPD that handles only non-emergency assignments like traffic enforcement, noise complaints, vehicle accidents, parade duty, quality-of-life crimes, etc. They’re time consuming for police. It would make street patrol cops more responsive as well. I’d make it adjunct to community policing by putting these cops on foot again and making them get used to dealing face to face with the communities they serve. I’d make it mandatory for all police academy grads to spend their first year(s) in this unit getting to know the people in and the concerns of their communities. If they perform well, they graduate to street patrol. Conversely, problematic line cops wouldn’t just get desk duty. They’d be sent downstairs to this unit for a refresher course in how to deal with the public. Such a program would weed out the Rambos who are mostly into it for the authoritarianism, not to serve their communities. Like the idiot 9th Precinct cop with three write-ups for excessive force who attacked a kid videotaping cops beating on people who weren’t socially-distancing in the East Village a couple of weeks ago.

This is what’s meant by “defund the police”.  It means deciding what we want cops spending their money and training on and funding law enforcement based on those priorities. We don’t need PDs gearing up for invasion by the Mongol hordes. If we need tanks, armored personnel carriers and paramilitary troops, that’s what the National Guard is for.

PrevPreviousCovidiots Are Testing Both Common Sense and Evolution. Not the Disease.
NextA Tale Of Two Covid-19 AmericasNext