Home » The Next Mayor Of NYC Is… 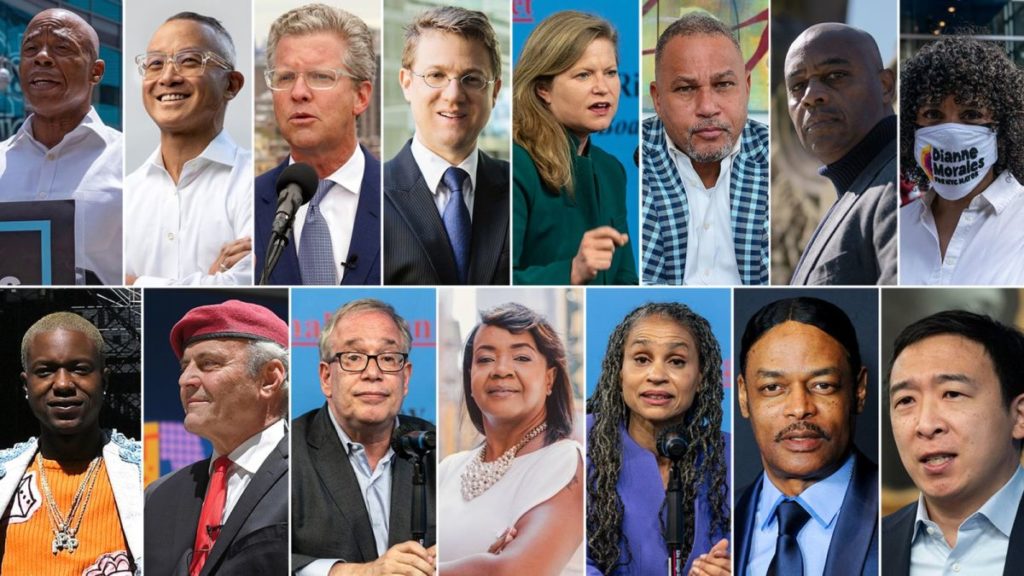 The Next Mayor Of NYC Is…

As even many non-New Yorkers know, NYC is in the final week of its Democratic primary for Mayor. I don’t know if it’s because Mayor De Blasio has high, bipartisan disapprovals. Or that a year of COVID-19 lockdown has made New Yorkers focused on the importance of local leadership. But NYC seems very engaged in the race for the Democratic nomination for mayor.

It’s a campaign notable for the number of people running. As many as 40 candidates initially filed to run. They were whittled down to 22 active candidates which is still a surprising number given that earlier mayoral seasons usually came down to the lesser of two evils. The Democratic race for mayor used to be about which man(!) spent the most time patiently waiting in line for his turn and the party delivering voters a couple of vetted, well-chewed apparatchiks. The blandness of those candidates is also why the Republican party has been so successful in the general mayoral election since 1994 despite NYC being overwhelmingly Democratic.

After the embarrassment of sending Trump to Washington the entire state has become even more Democratic. The 2018 midterms delivered Democrats a trifecta in Albany with 2:1 majorities in both houses of the NY Legislature.

Republicans can nominate whoever the hell they want. The only way any of them will get the keys to Gracie Mansion is if Democrats seriously stumble, which is always a distinct possibility.

My Breakdown of the Democratic Mayoral Candidates

When presented with lots of choices I usually fall back to a process of elimination.

First, I eliminated anyone who’s been dogged by corruption charges. Eric Adams has been accused of accepting free overseas trips. This is featherbedding more than corruption but it goes to Adams’ colossally poor judgment that after one of those trips he adopted Baku, Azerbaijan, one of the most corrupt, oppressive and dictatorial countries on the planet, as a “sister city” to Brooklyn. It’s so corrupt that even Trump had to pull out of his Trump International Hotel & Tower Baku project before the 2016 election when it was found to be a money laundering operation for Iran’s Revolutionary Guard.

Adams got the cut because of my Rule #2: if you’re currently in government and under-performed in your position, you’re out. Adams succeeded the very popular, term-limited Marty Markowitz who in the largely-ceremonial job as Brooklyn borough president accomplished a helluva lot: the Barclays Center, bringing Brooklyn its first NBA team, a beautiful and very popular High-A ball park for the Brooklyn Cyclones, creating the hugely successful Brooklyn Restaurant Week, restoring Coney Island and building its Ford Amphitheater, pushing for the Brooklyn Greenway, bringing an Apple Store and Whole Foods to the borough, and being an unabashed promoter of Brooklyn, down to the “Leaving Brooklyn — Fuhgeddaboudit” signs at the borders.

In contrast, in Adams’ two terms he’s left zero footprints as borough president. Seriously, I can’t think of anything he’s done that he can hang his name on. In his first year he even forgot to promote Brooklyn Restaurant Week, which was a mortal offense to Brooklyn restaurateurs and foodies. In my book, he’s just an empty suit politician looking for a lame-duck upgrade. He’s an example of why term limits don’t work. I think most Brooklyners would have given Marty the job for life if they could.

I’m also not a fan of electing cops to government posts simply because they were cops. Marty Golden is an example of what you can get. Spoiler Alert: Andrew Gounardes cleaned Golden’s clock in 2018.

Rule #3: you need experience running a large organization before assuming control of the largest municipal bureaucracy in the US if not the world. The NYC budget ($92 billion) is larger than that of New Zealand and it employs a workforce half the size of the population of Vermont. Regardless of what one thinks of Bloomberg’s three terms, his big-org experience brought order to the chaos, balanced the budget and created funding for some really useful programs like 311 and NYC BigApps. No matter what big ideas a candidate has, if s/he can’t get them fleshed out and implemented it’s DeBlasio all over again. For instance, DeBlasio’s pipe dream “Vision Zero” became a nightmare of ineptitude and false expectations leading to even more unsafe streets, earning it the snarky branding, Zero Vision.

That eliminates two candidates for me, neither of whom have experience running a large GO or NGO: Maya Wiley and Dianne Morales. I like both of them but neither have the experience to take on a bureaucracy as formidable as NYC’s. We saw with De Blasio what happens when you elect someone with populist ideas but without big management experience.

Andrew Yang is fun guy to watch for sure. I enjoyed his commentary during the DNC primary race for the presidency. He was allegedly a “billionaire”, implying that he has Bloomberg’s management credentials. He doesn’t. More to the point, he’s not even a billionaire. WSJ and Forbes estimate his net worth at under $2.4 million. Personal net worth should of course not be a factor in proving competence (i.e. Trump) but misrepresenting ones wealth should be (i.e. Trump). I’m not saying that Yang is another Trump but I’ve also not heard Yang dispel rumors of his vast wealth. Regardless, Yang actually falls under Rule #3. The largest company he ran was Manhattan Prep, a test preparation company, which as far as I can tell employed just 60 people while Yang was there.

Down to three: Stringer, Donovan and Garcia.

As a former state assemblyman, Manhattan borough president and NYC comptroller since 2013, Scott Stringer knows NYC’s bones and vessels like few others. I’d be comfortable with him as mayor even though his expertise is numbers, not necessarily vision. But he also has to face the general election and he’s dealing with two sexual misconduct complaints which, true or not, are likely to be exploited by Republicans in the general election. I definitely don’t want a Trumper blowhard like Curtis Sliwa squeaking through for a win because of it.

Shaun Donavan has lots of big government experience, from Sec’y of HUD to Obama’s Director of the Office of Management and Budget. He was also director of NYC HPD in the early 2000s so he has NYC government experience too. But Donavan’s “$100,000” response to the question of what is the median sales price for a home in Brooklyn was a shocker. How does a former NYC HPD director not know that it’s 10x that? How can a mayor fix a problem that he doesn’t know exists? I know it’s probably an innocent slip-up but he should have left it alone rather than try to weakly alibi it as being “assessed value”, which was still way, way off the mark.

Kathryn Garcia began her career as an intern at the NYC Dept of Sanitation and worked her way up to Commissioner in 2014. She was simultaneously appointed as CEO of NYCHA after widespread corruption was found in that agency. When COVID hit the city, she was also put in charge of the city’s emergency food relief in March 2020, distributing 200 million meals to seniors and homebound New Yorkers. One thing is for certain: some powerful people in government recognized her as a competent manager with initiative and the ability to get things done. I know there were bumps along the way but she was also wearing three hats at the same time.