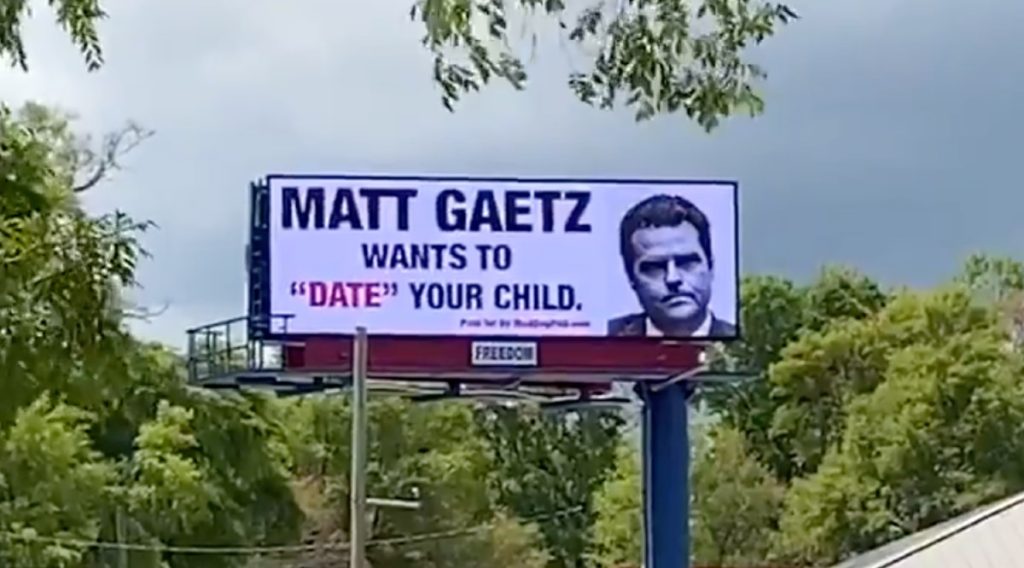 While Florida congressmoron, Matt Gaetz, protests his innocence and his “cancel culture”-obsessed mentor, Donald Trump, doubles down on his calls for boycotts of Coke, Nike, Delta Airlines, Amazon, the NFL, MLB and half the corporations in the Fortune 200 [1], it’s a good time to pause to simply enjoy the comedy of unabashed, nitwit hypocrisy. That includes Gaetz’ most vocal defender, Marjorie “Klan Mom” Taylor Greene, who staunchly defended Gaetz as a victim of “conspiracy theories”, which is funny on its own coming from this QAnon whackjob. But she allegedly deleted every photo of herself with Gaetz on Twitter yesterday. For that matter, it includes the entire GOP which went apoplectic over Governor Andrew Cuomo’s inappropriate (but not illegal) sexual tone-deafness while so far remaining mute about Gaetz. Only one Republican member of Congress, Rep. Adam Kinzinger (IL) , has called for his resignation in a five word tweet.

Nevertheless, the charges against Gaetz haven’t escaped notice by the House Ethics Committee. 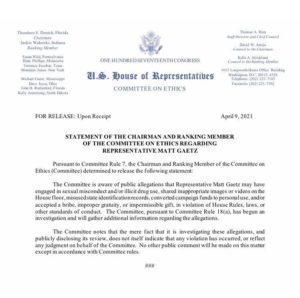 For those who haven’t been following the story, Gaetz is being investigated for violations of the Mann Act, which makes it a federal crime to transport a minor across state lines for the purposes of sex. The minor in this case is a 17 year-old prostitute who is also apparently a pivot witness in the prosecution of Gaetz’ longtime friend and campaign contributor, Joel Greenberg.

Greenberg has been indicted on a cornucopia of charges ranging from stalking to wire fraud to sex trafficking of under-aged girls to identity theft which, if convicted on all 33 charges, would put him behind bars for life. Yesterday, Greenberg’s attorney indicated his client’s willingness to take a plea deal which would require a full and truthful allocution of his crimes, including any crimes he may have committed with Gaetz. The FBI investigation of Gaetz has grown beyond the original “sex trafficking” investigation to include misappropriation of campaign funds, election fraud, wire fraud, witness menacing (in the Michael Cohen case), bribery and other federal crimes. In the words of Greenberg’s attorney, “I am sure Matt Gaetz is not feeling very comfortable today“.

Kneejerk wingnuts are claiming that it’s just another she said/he said amped up by Lib-uh-ralls to damage another rising star in the GOP. Nothing could be further from the truth. Gaetz has adopted the GOP’s off-the-rack Twinkie Defense of blaming hostile political rivals and Deep State boogeyman for trying to railroad him. Unfortunately for his story, the Deep State in this case would be the Trump White House. The Gaetz investigation began last summer while Trump was still gaslighting about his upcoming  landslide. Trump’s pet Attorney General, William Barr, personally signed off on the FBI investigation. It didn’t originate from Democratic character assassination, as Gaetz claims, but grew out of the Greenberg criminal investigation after Gaetz was discovered to be a possible wingman in some of the crimes. 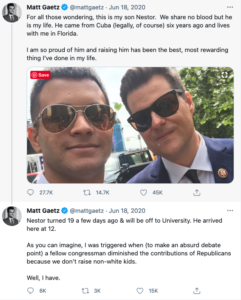 Gaetz came under scrutiny last year after it was learned that in 2012 he brought a 12 year-old Cuban boy, Nestor Galban, allegedly the brother of a female relationship gone sour, to live with him. For years, Gaetz paraded him around on Twitter and the local Florida news as a student, a helper, a soccer prodigy, a Florida congressional page. A cynical person might have seen this as a ploy by a white man to ingratiate himself with Florida’s young LatinX community. But Gaetz claims that he never talked about his relationship with Nestor because he wanted to protect the boy from his political life, which begs the question why Gaetz didn’t seem reluctant to use him as a publicity prop when it served him. It also didn’t explain the boy’s live-in status. It wasn’t until 2020 when Gaetz outed their relationship during a heated exchange in a House Judiciary Committee meeting, that he referred to Nestor as his “son”.

There are a couple of problems with this however, the first of which is that Gaetz never initiated a legal adoption process. To some it sounded like a wealthy old horn-dog referring to his young escort as his “niece”. People reasonably wondered why a single, 30-ish man with a self-described active social life would take in the little brother of a woman who told him to go fuck himself. The second is that Nestor already has a biological father residing in Miami. Nestor moved in with him during his junior year of high school allegedly because his district’s high school soccer team was more competitive. So it doesn’t appear that his real father is an abusive monster or someone that Nestor couldn’t live with.

Make of that what you will. What I can say is that when my father died when I was 13 years old, I didn’t move in with my brother’s ex-girlfriend nor would she have even thought to offer it. It also adds some possible context to the investigation of Gaetz for child trafficking with a second legal minor.

The sad thing is that Gaetz is what the new Republican party has become: a club for gaslighters and sociopaths like Trump, Taylor Greene, Gohmert, Boebert, Crenshaw, Jordan and shameless demagogues like McConnell, McCarthy, Cornyn and Cruz. The GOP long ago RINO’d out its statesmen and jettisoned whatever traditional conservative values it had for the purpose of holding on to power at all costs against a shrinking demographic. It got thrown from its patriotic high horse on January 6 with the Capitol insurrection and the Republicans’ weak response to, and in some cases even tacit support for, that treasonous farce. It abandoned its deficit hawk pretenses with both Bush2’s and Trump’s unproductive multi-trillion dollar tax cuts for corporations and the wealthy, neither of which were even justified as “stimulus” during those strong economies. There hasn’t been a single jobs, social welfare or infrastructure bill initiated by Republicans in this century. For all its quacking and race-baiting about “illegals”, it couldn’t pass immigration reform even when Republicans had both houses of Congress and the White House. Trump ran for re-election in 2020 without even a platform, which to my knowledge is a first. So one has to wonder if the GOP has any political philosophy deeper than “stick it to the Libs” and to prevent its enemies from voting.

[1] One hundred CEOs from some of the largest companies in the US are scheduled to be on a call tomorrow, April 11, to discuss withholding donations and investments in Georgia. So much for the attempted intimidation by McConnell and Trump. It’s a weird role inversion when corporations take the initiative of protecting the public from a selfish and greedy political party and not vice versa.

* I apologize for the unoriginal title. All the plays on “Gaetz” and “Gate” were used up, except “Brought Her Gate”, which is too nebulous.