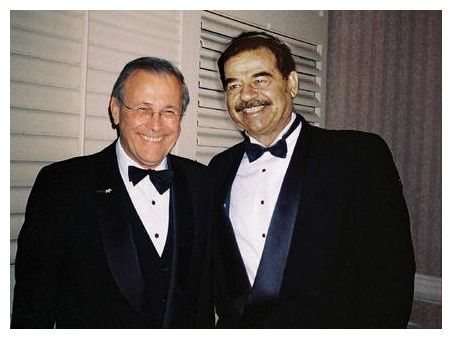 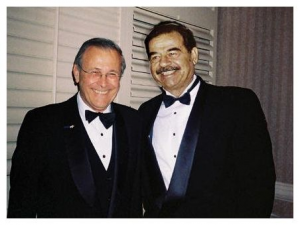 I remember the photo of Donald Rumsfeld with a big smile, glad-handing Saddam after sealing a military sale of chemical and biological weapons to Iraq. Reagan was so desperate to have a “friend” in that part of the world that he was able to overlook a lot, including trafficking chemical weapons through a CIA front company in Chile because they were banned by international law, including an American war ship getting hit with several Iraqi missiles, killing 37 American sailors.

Thirty years later and on the other side of the world, Trump is glad-handing a leader of a country that’s been just as brutal and oppressive of its people as was Saddam.

Today, Trump is patting himself on the back for his superior deal making skills. Yet the only signed agreement coming out of Singapore was a reaffirmation of agreements made back in 2005 and 2007 under the Six Party Talks convened by the Bush2 administration. In fact, it was even less than that because in 2007 NK was in agreement over the definition of “denuclearization”. Li’l Kim doesn’t agree with that.

There was nothing new in this document.  However KJU got a major win: international recognition of his backwards, shithole republic by sitting down with the president of the world’s oldest Superpower. One president is doing backflips in his grave because he learned the hard way how dangerous it is to accommodate a psychopath, leading to his famous quip made in regret: “Trust but verify”.  Four subsequent presidents learned from him.  The fifth just doesn’t learn, period.

Then we were told yesterday that Trump, off book, agreed to halt joint military exercises with South Korea because they were “provocative”. Of course they were. Those maneuvers were intended to provoke North Korea to rethink its long-stated obsession with conquering South Korea and to remind NK that the US has South Korea’s back. Oh, and Trump didn’t bother to tell South Korea about his unilateral gift to KJU.  And Li’l Kim didn’t give an inch on NK’s military threat to SK either.

But today DPRK radio is saying that Trump also — again, off book — agreed to unilaterally drop economic sanctions against North Korea which are imposed by UN treaty, to which the US is a signatory. So once again Trump is so eager to be besties with a brutal dictator that he’ll tell our longtime allies to go fuck themselves. Trump’s non-response to this revelation from NK isn’t a denial. He responded in non-denial language that modernizing and bringing North Korea into the 21st century is what will diminish the nuclear threat of North Korea.

Fine, that’s mostly true. But Deal Making 101 says you don’t give anything away without getting something in return. Is this the same “deal making” that caused Trump to buy the West Side rail yards twice only to have his Chinese partners kick him out? Is it the same “deal making” that drove Trump to build an Atlantic City casino that because of poor financing and bad management had a nightly nut a million dollars greater than any similarly sized casino on the AC strip ?  And when Trump Plaza ran in the red from Day One what sort of Wharton business logic says, hey, let’s open two more exactly like it?  All three went bankrupt even though most of his competition at the time is still profitable today.

Mainly, does it occur to Our Dear Dealmaker that this is precisely the bet that President Barack Obama made with the Iran nuclear agreement, also referred to by Trump as “the worst deal ever made”? The difference is that Obama got a basket of concessions from Iran in return, including a real, verifiable commitment to destroy Iran’s nuclear stockpile. Trump got nothing. Li’l Kim gave nothing.