Home » Do you know which team you play for? 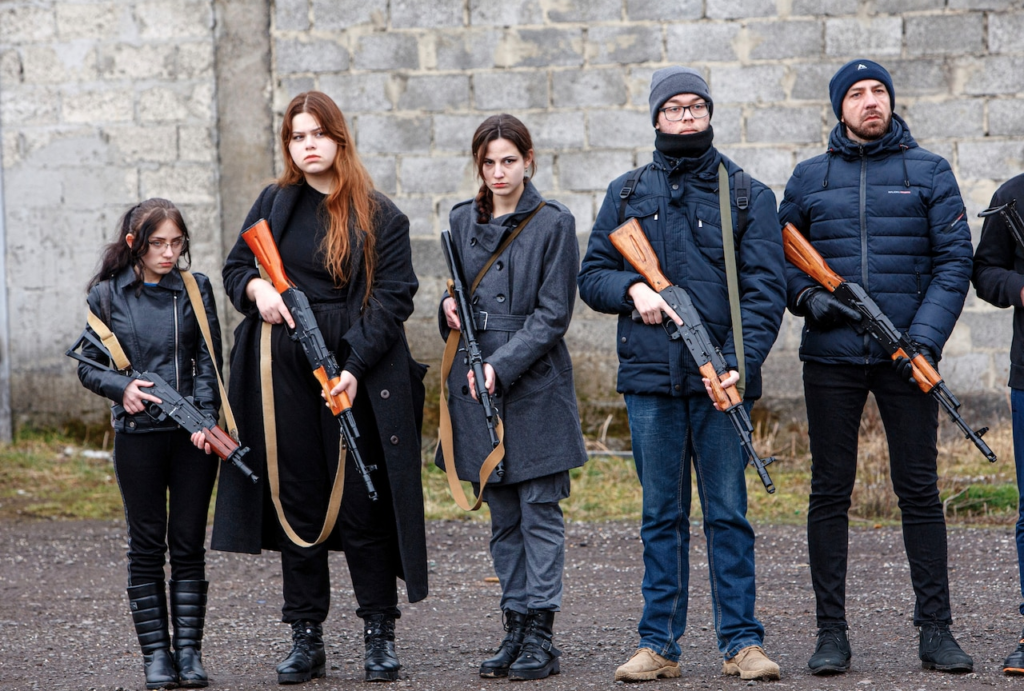 Do you know which team you play for?

“I went in yesterday and there was a television screen, and I said, ‘This is genius! Putin declares a big portion of of Ukraine, Putin declares it as independent. Oh, that’s wonderful. So, Putin is now saying, ‘It’s independent,’ a large section of Ukraine. I said, ‘How smart is that?’ And he’s going to go in and be a peacekeeper.”

“He’s taken over a country for $2 worth of sanctions. I’d say that’s pretty smart.”

“This never would have happened with us.”

These statements were made by Donald J. Trump in the early hours of Putin’s unprovoked and unjustified attack on Ukraine, a country with a democratically elected government and a people who decisively rejected Russia’s attempt to corrupt their political system in 2004 and 2010 with rigged, heavy-handed elections of  Putin’s Ukrainian stooge, Viktor Yanukovych. And who, by the way used Trump’s 2016 campaign manager, Paul Manafort, to help orchestrate it. With gushing praise like this who needs propaganda?

This was the same Donald J. Trump who was impeached for attempting to extort Ukraine’s president into publicly investigating his political rival by denying his country the means to defend itself against its much larger bully, Russia. Disgusting.

If there were any doubts that Trump is and has been for years a sock puppet and Useful Idiot for the brutal dictator, Vladimir Putin, his response to Russia’s invasion of Ukraine should remove them for good.

Of those three statements above, truth can only be found in one of them: the last one. Trump would have sat on his  treasonous ass, regurgitating Putin’s lies as he always has and wouldn’t have lifted a finger to help either Ukraine or our NATO partners. He’s right. That never would have happened with them. Ukraine’s President Zelenskyy would be dead, in prison or driven into exile by now.

How can one say this? Because Trump refused to act on virtually every effort by Putin to revive the old militaristic Soviet Union and to restart the Cold War. From the moment he took the US presidency Trump has behaved like the American version of Yanukovych: an unabashed puppet of Vladimir Putin. His whose own controversial 2016 election had the same stench of Putin’s dirty tricks. The Trump administration debuted with his desperate and failed attempt to lift the “$2 worth of sanctions” against Russia for its 2014 invasion of the Crimea and the shooting down of Malaysia Air 17. It quickly segued to his refusal, even to this day, to acknowledge the findings of every US and western intelligence service and even his own party in the Senate. The Republican-majority Intelligence Subcommittee concluded that Russia meddled in the 2016 election to help Trump’s campaign. Trump’s behavior is that of an apparatchik — a quisling playing for the other team.

In fact, CNN catalogued 37 instances where Trump placed the conflicting interests of Putin over those of the United States. Never mind the question of what kind of president would be so weak and craven as to do this. What kind of American is he?

But it’s not just Trump. It’s his entire enabling cult which continues to worship him as some sort of Cheeto Messiah, from the despicably dishonest and delusional Republicans in Congress like Klan Mom Taylor-Green and Moscow Mitch all the way down to the gullible red state proletariat, like these two grinning Ya’ll Qaeda hyenas.

You don’t have to look under rocks to find them. They flock to his canned rallies like a Sturmabteilung Burning Man. They’ve outed themselves in the media, and not just in the US but in Russia. Russian state television has been airing translated clips from Fox News host Tucker Carlson defending Putin. Same with Mike Pompeo. Farther down the Trumper food chain, out on its fringe, is a motley crew of Qanon whackjobs, white nationalists, xenophobes, evangelists, sovereign citizens and Second Ammendment(sic) gun nuts  protecting their freedumbs against tyranny while fist-pumping the Russian repression of rights in Ukraine. 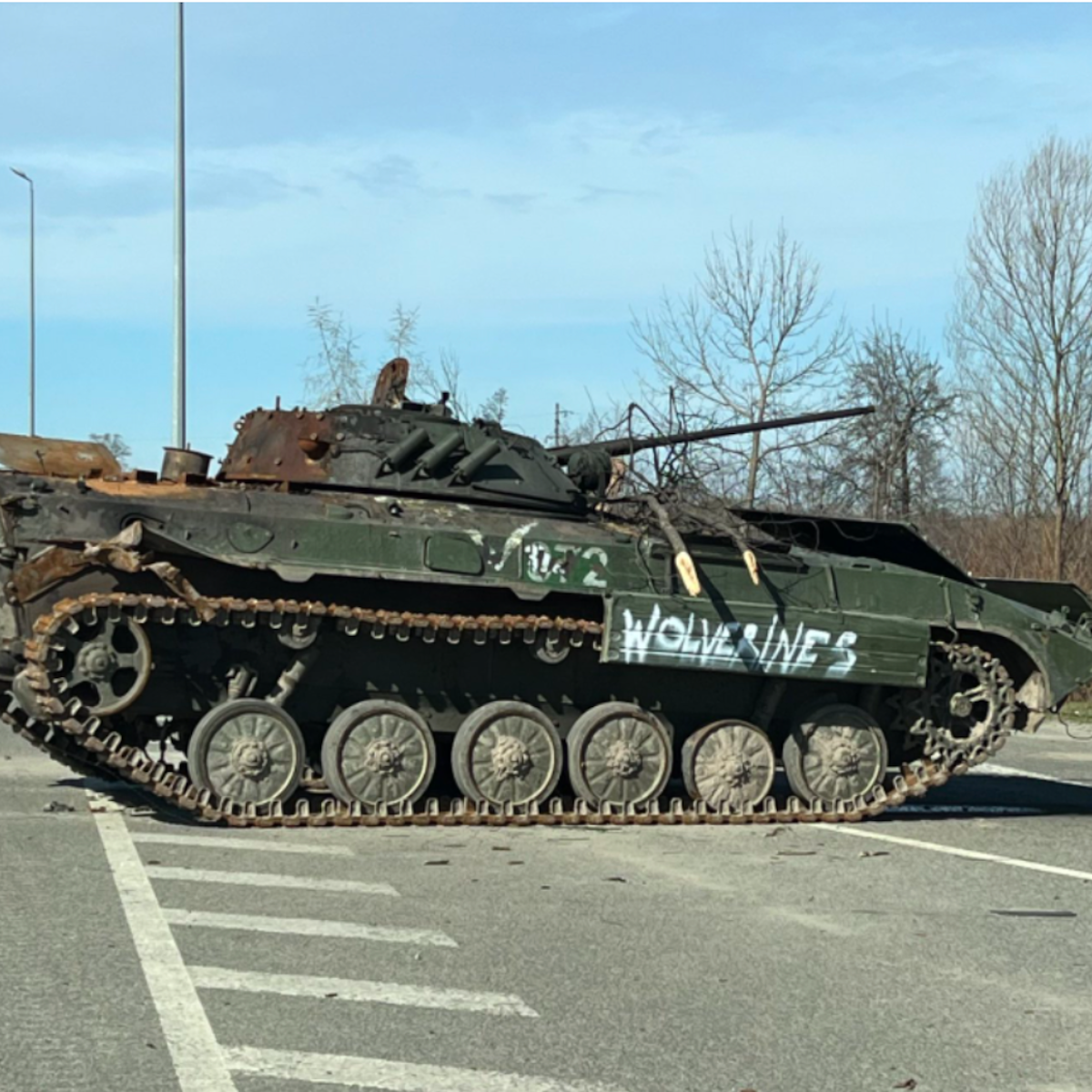 As a snarky aside, there will probably never be another remake of “Red Dawn” because the movie would be only about ten minutes long. Our Meal Team Six militias would probably greet Putin’s invasion army with brewskies and lists of Democrats to arrest.  The real Wolverines are in the photo at the top of this article and the defenders who tagged this Russian T-72 tank. That’s what actual patriots look like, Jim Bob. They’re not strapped and strutting around Walmarts scaring the shit out of people. And they ain’t playin’.

The modern American right wing has developed a curious definition of patriotism. We’ve seen it several times recently with the country under threat from a Moscow madman, a power blackout and a microscopic virus. It’s as though cowardice, selfishness and ducking ones duty to ones fellow Americans have become heroic virtues while those embracing courage, honor and sacrifice are for losers and suckers. 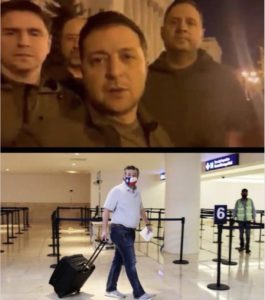 I saw this photo mashup on the internet. It was one of those pictures that says a thousand words. For most of us the photo needs no commentary but at the top is Ukrainian President Zelensky staying behind in Kyiv to lead his people in their resistance against the deadly Russian invasion on his soil. He was offered safe passage out of the country but he refused, saying that he needs “ammunition, not a ride“.

At the bottom is Ted Cruz, one of the leaders of the Trump wing of the Republican party. He’s quickly vamoosing Texas for sunny Mexico because the Texas power grid failed again and Ted doesn’t like a cold crapper. He abandoned millions of his Texas constituents (and his dog) in sub-freezing weather at a time when leadership was desperately needed.

Predictably, the overwhelming outrage against some Republicans’ Putin man-crush caused most of these feckless patriots to publicly reverse themselves with about as much conviction as Trump’s “very fine people” comment following Charlottesville. I don’t buy it and neither should you. They’re a cancer on the republic and a stain on America’s international reputation. But it doesn’t matter. Cruz knows he will be re-elected anyway. The new Millennia Republican Party doesn’t stand for much except lack of courage, accountability and actual patriotism.

PrevPreviousIs Stoop Dog a Closet Metalhead?
NextWe’re Immersed In Yet Another Witch Hunt!Next