Home » We’re Immersed In Yet Another Witch Hunt! 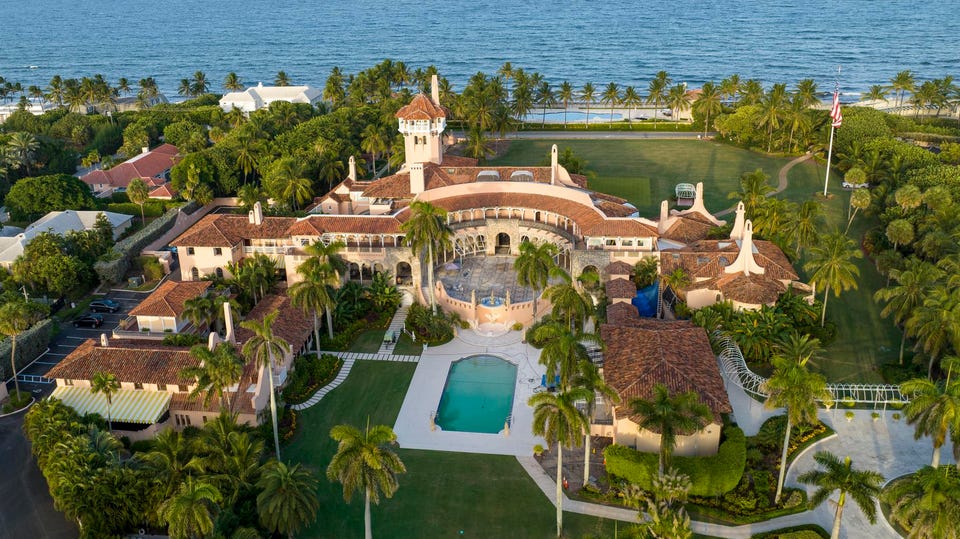 We’re Immersed In Yet Another Witch Hunt!

Dear Sean: A “witch hunt” is about prosecuting an innocent person for a phony crime. This isn’t about finding a scapegoat for why the village chickens stopped laying eggs. Trump’s illegal possession of stolen documents is about real crime under US Code, solid evidence, constitutional due process and bringing a chronic scofflaw to justice who’s been in many, many legal actions like this before. He’s learned nothing from any of them. His disdain for the consequences of his dishonesty, corruption and selfishness is epic.

Only three years ago, New York’s Attorney General, Latisha James, had Trump’s entitled mud flaps in the defendant’s chair in the Trump Foundation civil trial where Trump pleaded “no contest” to all 16 counts in the indictment. That was in lieu of him mounting a defense which would have put him under oath in a witness chair. He preferred to cop to civil charges of charity and election fraud, money laundering, embezzling, tax evasion, misappropriation and self-dealing than answer questions truthfully under oath. It cost him over $2 million in fines, dissolution of Trump Foundation and his being banned from sitting on the board of a nonprofit again. He lost with the judge expressing that his governance of his charity for “kids with cancer showed a “shocking level of illegality“.

This is just a reprise of the Trump Foundation case but after a much, much larger fish: the Trump Organization. No matter, James is 1:0 against Trump. She knows how to deal with this intransigent asshole. She wouldn’t have filed the charges if she didn’t know she didn’t need his cooperation.

In his deposition for James’ latest lawsuit, Trump took “the Fifth” over 440 times.That must have been painful for him because we know what he thinks about guilty lowlifes who do that.

But let’s keep the witch hunts on point. The “witch hunt” that Hannity is blubbering about is the recent Nuclear Secrets case and the search warrant served by the FBI to retrieve the documents he stole from the White House and which he spirited off to Mar A Lago.

This would have been a slam dunk case even without the classified documents component. Each and every one of those documents belongs to the National Archives, not to Trump. It’s the same as if he had walked out with the Oval Office Resolute Desk and the bust of Jefferson (which in fact he reportedly did).

But this case is mostly about Trump also taking classified documents, some of which are allegedly nuclear top secrets, at least four of which are so classified that the FBI said it couldn’t even summarize what they contained for the retrieval log. It’s also about a White House whistleblower who notified the FBI of what Trump had taken which led to nearly a year of demands from the National Archives, the FBI and a federal grand jury that he return all of them. He refused. Trump’s security clearance was revoked at 12:01pm on January 20, 2021 so he’s not even legally allowed to see the galley shopping list aboard the USS Teddy Roosevelt. (Yes, it’s marked “Confidential”. I saw it but I had DHS TS-SCI clearance.)

One may rightly ask why a man who can’t even pronounce “nuclear” would want to keep a bunch of top secret documents written about 15 levels over his big brain’s capacity to understand them. The feds want to know that too because the Occam’s Razor conclusion is too terrible to contemplate — that he intended to share them with people who do understand them. 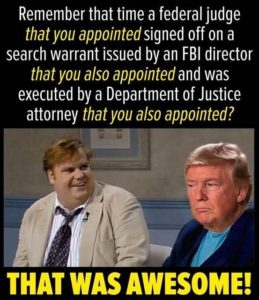 In response, the Trumposphere — the same ones who chanted “Lock her up!” when Hillary was found with merely “Confidential” documents on her mail server — have been in an unhinged frenzy to defend their golden boy.  “He’s the president! He can declassify whatever he wants!”

Actually, no he can’t. Nuclear secrets are protected by the Atomic Energy Act of 1956. Under the law, nuclear secrets are “born secret“. There’s a process for declassifying them that requires the approval of the Nuclear Regulatory Commission. To transfer that technology to a foreign state requires additional approval by Congress. Trump of course didn’t bother with this because, well, he’s Donald Trump.

Which brings us back to the same question. What was Trump’s intent for taking those classified documents? Who would he share them with? Or were they just intended as mementos to remind him of what a big shot he used to be?

The leftie-commie-socialist blogosphere says “Russia!” but I think Putin is done with Trump. The latter has outlived his potential usefulness to his old BFF. And, besides, Ukraine sanctions make it difficult to quietly move a pile of Russian rubles to the West. However, there may be a clue in what Trump and Kushner did in 2019 for Saudi Arabia.

Trump’s business empire has been in steady decline since 2012. We know he’s leveraged to the ceiling with a reported personal debt of $1.3 billion and a $45M note coming due at Deutsche Bank in 18 months. At 5% interest over 20 years, that’s a nut of $7 million/month just for the banks, before property upkeep, his Trump Force One fleet and of course Big Macs. Western banks haven’t taken his calls since the 90s, the Russians are done with him, he burned Chinese and Taiwanese oligarchs with his Riverside South debacle as well as his targeted ‘jina tariffs so who else is there? Who will be Trump’s new sugar daddy? 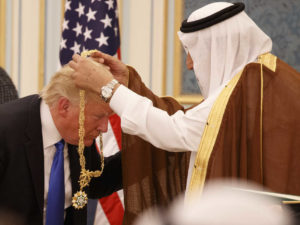 Saudi Arabia! Lots of wealthy oligarchs like Mohammed “Bone Saw” bin Salman to become his new best friends! To that end, Salman invested $2 billion last year in a fund created by Jared Kushner, which has at best a shaky investment track record, and a new, Saudi-backed golf tournament which largely benefits Trump’s golf courses. So the quid pro quo is already dripping from this latest controversy.

And, bonus, Saudi Arabia is a non-extradition country if things get hotter for Trump here than it is in Riyadh. Just beware, Donald. When you steal stuff over there you face Sharia justice.  *Whack*

PrevPreviousDo you know which team you play for?
NextWhat’s with the lying?Next