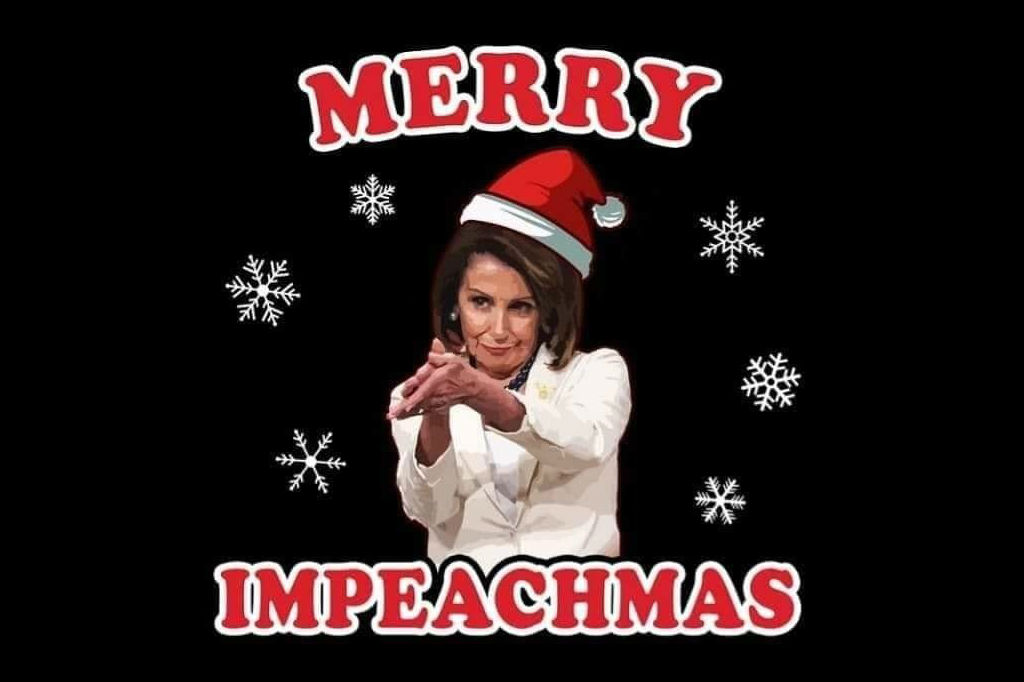 It’s over.  It was the expected party-line vote but the evidence against Trump was irrefutable in a 300 page document from the House Select Intelligence Committee. Every witness who testified said that Trump had committed crimes; every White House official who said he didn’t also refused to testify under oath. After a series of different denials, Trump even admitted to the crimes but claimed that the law didn’t apply to the president  A federal district court strongly disagreed and so did a majority of the House.

The country was again reminded what a petty, corrupt con man had managed to thwart the will of the people in 2016. As a two-fer we also got to see up close the barking sycophants who have protected his bad behavior from Day One: a Borg-like colony of enabling WTF dittoheads who put party well over the nation, the Constitution and the law. It was a passion play of eye-popping partisanship. It was made all the more Wonderlandish by a president who said he was only trying to investigate Biden for doing the same things he was being accused of doing but which Trump said were completely lawful when he did it. Huh? Let that logical shipwreck sink in for a moment. That’s the dissonant brain of Donald J. Trump. 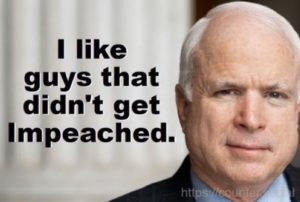 Today, Republicans are crowing about how the Democrats shot themselves in the foot, how there will be hell to pay in 2020, and that Trump’s rising poll numbers prove it!  Let’s put that into historical perspective.

Everyone knew and expected that Trump would get a sympathy bump from impeachment. So did Bill Clinton although Clinton’s bump was double digit (61% to 71%) while Trump’s is pretty weak by comparison: 41% to 43% over the past four weeks. That’s probably because only a third of the country supported Clinton’s impeachment while 54% wanted Trump (at least) impeached today. Half the country wanted him convicted as well.

A week after Clinton’s impeachment, with the country settling back in, Clinton’s numbers dropped back to the low 60s again. That’s why it’s called a “bump”. The same will happen to Trump, except he’s never been within spitting distance of the 50s let alone 60s.

Trumpers vastly over-estimate both their own numbers and Trump’s popularity. Trump wasn’t the choice of the majority of voters in 2016 and that majority still doesn’t like him. His disapproval rating hasn’t dipped below 50% in three years, which reflects the opinion of that same majority of non-Trump voters. I don’t know why Trump’s fanboys have such a hard time comprehending this. Trump has done nothing to win them over either. In fact, he’s done the opposite.

Trumpers blame Democrats as being spoiled babies for not accepting Trump as their president. As usual, they have it ass backwards. To say that Trump hasn’t done anything since his Inauguration to earn the support of voters who didn’t vote for him would be a huge understatement. A different president would have made some effort to do the kumbaya thing if only to soften up Independents for the next election cycle. It would have begun with his inauguration speech, where the newly sworn-in president typically says that he will be the president of all the people, not just the ones who voted for him, blah blah.

But Trump didn’t. Instead, he prattled on about “American carnage”, a “decayed infrastructure” (which he’s done even less about than any of his predecessors) and a dystopian vision of the future and how only he, President Donald J. Trump, could prevent it. It was bizarre enough monologue for Bush2 to lean over to Hillary and remark, “Well, that’s some crazy shit”.

Almost immediately after that speech Trump set out to alienate Democrats, the media and anyone else who looked at him sideways, even within his own party. It began when he chummed the waters with his phony inauguration crowd size claims. It was America’s first taste of the raging, dishonest man-baby our illustrious electoral college had selected for us, complete with schoolyard name-calling and obnoxious behavior befitting the petulant, privileged wanker that even his own corrupt father couldn’t deal with. Except we can’t send him off to military school to get him out of our sight. We can only impeach him.

Here’s a tip for your next circle jerk, Trumpoids: Dems know that the economy was doing well when Trump got there, despite your castrated and fact-free narratives to the contrary. We know that Trump inherited an economy with 80 straight months of growth after the worst financial collapse since the Great Depression. We know that Obama created 1.1 million more jobs during his last three years than has Trump and that Trump improved the unemployment numbers by a trivial 1.1% while Obama can claim 5.3%. And while Obama actually reduced the deficit (but not by enough to satisfy the pious Republican “budget hawks” in Congress who shut down the government over it) Trump has actually grown the federal budget by $450 billion over his last one and created the first ever $1 trillion federal deficit. Shhhh… quiet! Did you hear a single cough in the room from Republicans?

If any president should be credited with setting the economic ship back on course for recovery it certainly wouldn’t be Trump.

Trump grandstands only for his fawning base and that’s what’s going to keep him in the low 40s. That’s who he is. He’s the president of the 40%. All things being equal it’s going to cost him in 2020, if only because his base isn’t large enough to “trump” a 52. At least not without Russian assistance.