Home » Have we had enough winning yet? 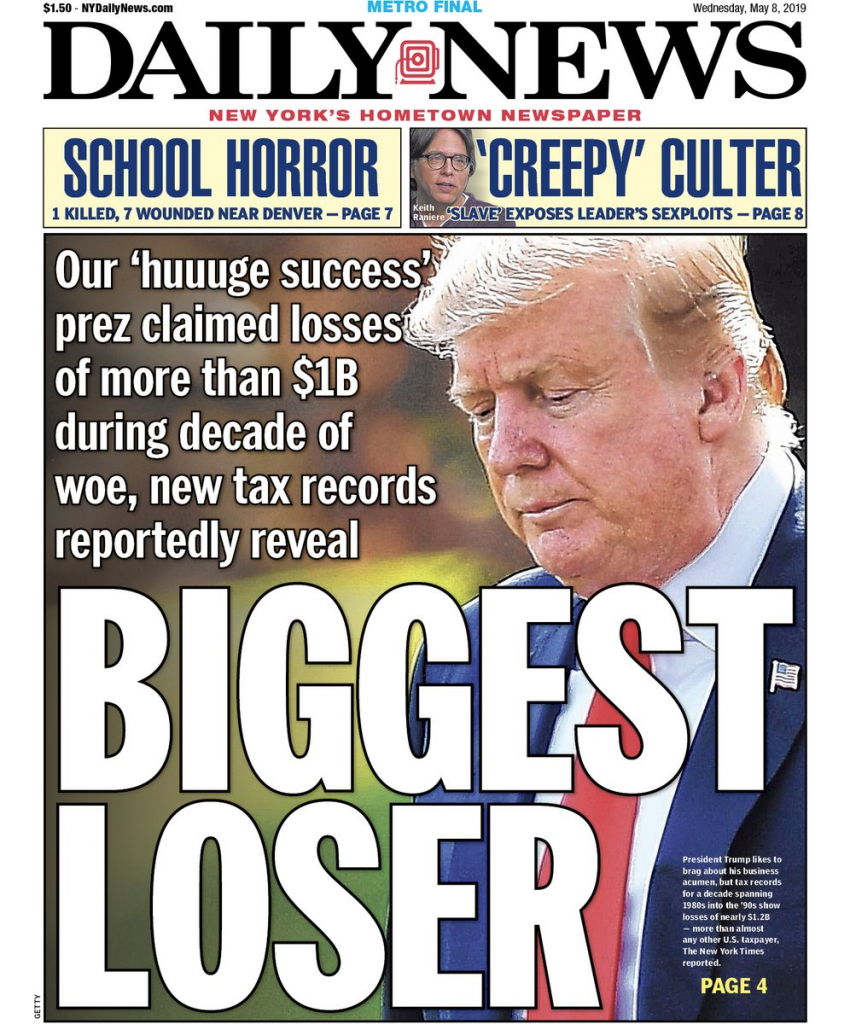 Have we had enough winning yet?

“U.S. steel prices have risen nearly 40 percent since the start of the year, and are now more than 50 percent higher than in both Europe and China, according to the S&P Global Platts benchmark price assessment for hot-rolled coil, the bellwether product.”

Trump’s fans need to ask themselves something, even if they’ve capriciously chosen to ignore every argument against him. IF Trump was a good businessman and IF he had any basic business ethics and knew what the hell he was doing, would he be blackballed by virtually every western bank and private equity firm? Would he be forced to rely on a sordid assortment of shady Russian oligarchs, ethically challenged middlemen and outright gangsters to finance his high-flying lifestyle?

Would a good businessman have six (6) catastrophic bankruptcies costing billions, all of which are blamed by nonpartisan analysts on gross incompetent mismanagement? If he was comfortable about the ethics and legality of his tax returns would he be so terrified for people to learn the truth about his questionable financial dealings that he would refuse to honor his promise to release his tax returns? Would he surround himself with feckless lapdogs and incompetents, from his cabinet all the way down to his personal doctor and lawyer, rather than notable professionals with considerable experience in their respective field, if he wasn’t more interested in hiring obsequious puppets than qualified people?

Do you see this same circus of failure going on with other billionaires? Warren Buffet? Larry Ellison? Jeff Bezos? Michael Bloomberg? Charles and David Koch? Larry Page? Mark Cuban? Or any of the other 500+ billionaires on the planet?  If we had, is there any doubt that Trump would be the first to brand them losers and crooks?

Last week, our western trading partners — Canada, Mexico and the EU — announced $40 billion in retaliatory tariffs to counter Trump’s arbitrary tariffs against them.  In response to another Trump executive order levying tariffs against China, China announced its own retaliatory 25% tariffs on US produced imports worth up to $50B and nullification of all previous trade agreements with the US. How did Trump respond?  Like the mindless and heavily bruised bully that he is: by threatening even greater tariffs against China.  And China predictably responded to the threat in kind. Here’s the end game, Trump: China has a third of a TRILLION dollar trade balance advantage over us.  Don’t play nickel ante poker with an opponent who flew in on a Gulfstream 5.

In the business world, the collateral damage from Trump’s lunacy and incompetence as president of Trump Organization, while very costly, was contained just to his investors and the banks who mistakenly trusted him.  Here, the blowback affects all of us because the US economy is at stake, not Trump’s nebulous net worth.

Trump’s fans say “Wait! Wait! Trump is playing a game of five dimensional Klingon chess here and we can’t possibly know what he’s thinking!”  Except we can. There are no examples in Trump’s business past of him out-maneuvering an opponent, just being an opportunist when opportunity presented itself.  In fact, in most cases Trump made his fortune by screwing the very people who supported and trusted him in his various ventures and made them possible: the financiers, city planning boards, his construction subs.

Trump’s greatest victory was outsmarting those who voted for a TV celebrity who sounded presidential, so long as you squinted hard enough not to notice the 14 year-old spoiled brat under the suit.  Trump has fairly consistently wound up the loser in thousands and thousands of court encounters, with the government, with investors, with workers, with ex-wives. The day before he was inaugurated Trump wrote a $25 million check for the fine in the Trump U fraud case. What a way to kick off his shiny, new administration and swamp renewal project.

NextCitizen Journalist of the YearNext